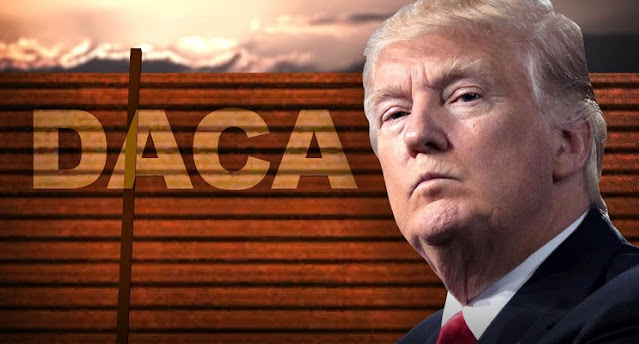 President Trump said Friday he intends to sign an executive order on immigration within the next month that he said will include a "road to citizenship" for recipients of the Deferred Action for Childhood Arrivals (DACA) program.
In an interview with Telemundo anchor José Díaz-Balart, Trump blamed Democrats from walking away from a deal on DACA and said the Supreme Court's decision last month blocking his administration's plan to end the Obama-era program gave him "tremendous power."
"The deal was done. DACA is going to be just fine. We’re putting it in. It's going to be just fine. And I am going to be, over the next few weeks, signing an immigration bill that a lot of people don't know about. You have breaking news, but I'm signing a big immigration bill," Trump told Díaz-Balart.
"Is that an executive order?" the anchor asked.
"I'm going to do a big executive order. I have the power to do it as president and I'm going to make DACA a part of it," Trump responded. "But, we put it in, and we'll probably going to then be taking it out. We're working out the legal complexities right now, but I'm going to be signing a very major immigration bill as an executive order, which Supreme Court now, because of the DACA decision, has given me the power to do that."
Asked whether the executive order would provide temporary relief for DACA recipients, Trump said its scope would be much wider.
"No, what I'm going to do is that they're going to part of a much bigger bill on immigration. It's going to be a very big bill, a very good bill, and merit-based bill and it will include DACA, and I think people are going to be very happy," said Trump.
"But one of the aspects of the bill is going to be DACA. We're going to have a road to citizenship," he added.
It's unclear whether the president can grant a category of undocumented immigrants – in this case DACA beneficiaries – permanent legal status with a road to citizenship.
When former President Obama created the program through a Department of Homeland Security memorandum in 2012, he was criticized for executive overreach, although DACA only provides temporary deferral from deportation and a work permit to certain undocumented immigrants who meet a set of conditions.
After Trump rescinded that memo in 2017, he gave Congress six months to pass a statutory replacement for DACA, sparking a flurry of legislative activity that ultimately ended in a deadlock, as the White House nixed a nascent bipartisan agreement.
That legislation was replaced by a Republican-led bill, which included provisions unacceptable to Democrats, such as severe reductions of family-based immigration and the diversity visa program.
Negotiations fully broke down after Trump's rescission was blocked by the courts, starting a two-year process that ended in June's Supreme Court ruling.
In Trump's view, the Democrats broke a deal in leaving the negotiating table after the bipartisan deal had been nixed by the White House.
"I had a deal with the Democrats and they broke the deal. The DACA could have been taken care of two years ago, but the Democrats broke the deal. All of a sudden they just broke it for no reason. Actually, they had a court case that slightly went their way, and they said, 'Oh, let's not talk about the deal anymore,'" Trump told Díaz-Balart.
But Trump said he feels empowered by the Supreme Court ruling, in which Chief Justice John Roberts affirmed the executive branch has the power to do away with DACA, but that proper procedure was not followed in the 2017 order.
"If you look at the Supreme Court ruling, they gave the president tremendous powers when they said that you could take in, in this case, 700 thousand or so people, so they gave powers," said Trump.
"Based on the powers that they gave, I'm going to be doing an immigration bill. One of the aspects of the bill that you will be very happy with, and that a lot of people will be, including me and a lot of Republicans, by the way, will be DACA. It will give them a road to citizenship," he added.
National World