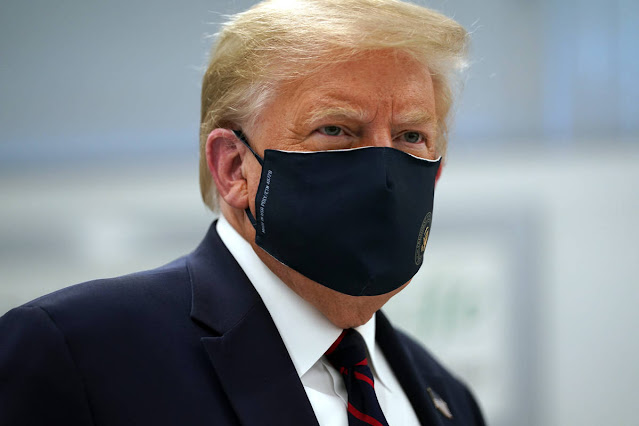 President Trump on Thursday suggested delaying the 2020 elections, something he does not have the power to do unilaterally, as he levied fresh attacks against mail-in voting.
Trump, who is badly trailing presumptive Democratic presidential nominee Joe Biden in national polls, framed the suggestion as a question and argued that with more mail-in ballots there would be more fraud.
There is no evidence to support the idea that either absentee or mail-in ballots increases voter fraud. It also does not appear that there will be universal mail-in voting this fall, though some states require mail-in ballots.
"With Universal Mail-In Voting (not Absentee Voting, which is good), 2020 will be the most INACCURATE & FRAUDULENT Election in history," Trump tweeted. "It will be a great embarrassment to the USA. Delay the Election until people can properly, securely and safely vote???"
The tweet marked the first time Trump has raised the idea of delaying the November elections, an idea he previously rejected amid concerns about the coronavirus pandemic.
But the president has for weeks railed against the expansion of mail-in voting, which more and more states are embracing as an alternative to in-person voting during the pandemic.
Election Day takes place on the Tuesday after the first Monday in November, as determined by federal law. Moving the date would require an act of Congress.
Trump's tweet is likely to fuel concerns from critics and watchdogs who worry about the president attempting to undermine the legitimacy of the 2020 presidential election. In an interview earlier this month with "Fox News Sunday," Trump would not commit to accepting the results of November's election.
The president has been trailing in the polls to Biden for weeks both nationally and in key battleground states, and he has been on an extended campaign to question the validity of mail-in voting.
"Mail-In Voting is already proving to be a catastrophic disaster. Even testing areas are way off," Trump tweeted Thursday morning. "The Dems talk of foreign influence in voting, but they know that Mail-In Voting is an easy way for foreign countries to enter the race. Even beyond that, there’s no accurate count!"
The coronavirus pandemic, which has killed more than 150,000 people in the U.S. and infected more than 4.4 million in the country, is expected to affect the election. It's possible that results of the election could be delayed given the need to count mail-in ballots.
During the primary season, state elections officials reduced the number of polling places, leading to long lines that forced voters to wait hours to cast a ballot.
Several states have moved proactively to increase ballot access ahead of November's elections in light of concerns that in-person voting may be dangerous for those at risk for the virus. Michigan and Wisconsin mailed registered voters applications to vote absentee in late May.
Trump campaign spokesman Hogan Gidley defended the tweet, saying Trump was "just raising a question about the chaos Democrats have created with their insistence of all mail-in voting."
"Voter rolls are notoriously full of bad addresses for people who have moved, are non-citizens, or are even deceased," Gidley said. "Universal mail-in voting invites chaos and severe delays in results, as proven by the New York Congressional primary where we still don’t know who won after more than a month.”
There is no evidence that mail-in voting contributes to widespread fraud, though Trump and his allies have seized on the rare examples to argue the entire practice is subject to problems. Colorado, Hawaii, Oregon, Utah and Washington already conduct their elections primarily by mail.
Senior White House adviser Jared Kushner caused an uproar in May when he told Time magazine that he couldn't commit one way or the other that the election would take place Nov. 3. He later clarified that he was aware the date was set by federal law and had not been a part of any discussions about moving it.
Biden in late April predicted Trump may try to push back the presidential election, a suggestion the president's campaign dismissed at the time as "the incoherent, conspiracy theory ramblings of a lost candidate who is out of touch with reality."
“Mark my words: I think he is going to try to kick back the election somehow, come up with some rationale why it can’t be held,” Biden told supporters, adding that he felt it was "the only way [Trump] thinks he can possibly win.”
Trump himself brushed off Biden's accusation at the time.
“The general election will happen on Nov. 3,” Trump said at a news conference in April.
Democratic lawmakers on Thursday were quick to label Trump's musings about delaying the election as a distraction from his handling of the pandemic and poor polling numbers.
"There is no way @POTUS can delay the election. We shouldn't let him distract us from his #COVID19 incompetence," Sen. Tom Udall (D-N.M.) tweeted. "But the fact that he is even suggesting it is a serious, chilling attack on the democratic process. All members of Congress— and the administration— should speak out."
"Prez has no authority to delay elections," Rep. Rick Larsen (D-Wash.) tweeted. "One more try at throwing a shiny ball out there to divert attention from: inept handling of the pandemic; ignoring intel on Russian bounties; devastating economic numbers; lack of action or plan on next COVID-19 relief package."
National