Trump doubles down on hydroxychloroquine, praises doctor in controversial video 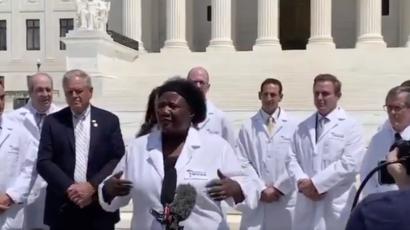 President Trump on Tuesday doubled down on his defense of using hydroxychloroquine to treat COVID-19, despite substantial medical evidence disproving its effectiveness, saying he believed the debate about it had become “very political.”
He also spoke warmly of a doctor featured in a video he retweeted overnight Monday that touted the controversial drug as a treatment for the coronavirus. The video, which also claimed people didn't need to wear masks, has since been removed from a number of platforms for violating policies on misinformation.
Trump has long been enamored with hydroxychloroquine, a drug that's been used to prevent malaria for more than 60 years. He's pushed it as a "game changer" for months, leading to accusations that the Food and Drug Administration (FDA) caved to pressure in approving an emergency authorization early in the pandemic.
The agency withdrew that authorization last month amid mounting evidence from multiple clinical trials showing hydroxychloroquine is not effective at treating COVID-19 and can cause serious adverse events, including heart rhythm irregularities
“It’s safe. It doesn’t cause problems. I had no problem. I had absolutely no problem,” Trump told reporters Tuesday during a briefing at the White House, referencing his own use of hydroxychloroquine earlier this year for a 14-day period. “It didn’t get me, and it’s not going to, hopefully, hurt anybody."
Trump added later that he believed use of the drug to treat COVID-19 has become taboo specifically because he has promoted it.
“Many doctors think it’s extremely good, and some people don’t," Trump continued. "I think it’s become very political,” Trump continued.
Public health officials have repeatedly said that there is no evidence the drug is effective in treating the disease.
“The overwhelming prevailing clinical trials that have looked at the efficacy of hydroxychloroquine have indicated that it is not effective in coronavirus disease,” Anthony Fauci said on “Good Morning America” earlier Tuesday
After the FDA revoked its authorization, White House officials began pushing the agency to reverse course following a study at Detroit’s Henry Ford Health System that found death rates were lower for patients treated with hydroxychloroquine.
Scientists said the study was seriously flawed and far less rigorous than others that showed hydroxychloroquine is not effective at treating COVID-19.
Trump mentioned the Henry Ford study as a "very good test" on Tuesday and defended the viral video touting the drug, which was initially broadcast by the right-wing outlet Breitbart.
Trump said a female doctor in the video, appearing to reference Stella Immanuel, made “specular” statements about hydroxychloroquine. He also described the doctors in the video as “very respected” and questioned why social media companies removed the videos.
Immanuel has previously claimed on YouTube and in articles on her website that gynecological problems, such as endometriosis, cysts and infertility, are caused by individuals having sex with demons and witches in their dreams. She claims alien DNA is currently used in medical treatments and that scientists are developing a vaccine to prevent people from being religious.
Asked later about outlandish statements made by Immanuel, Trump said he believed she was “impressive” but that he knew “nothing about her.” Trump left the briefing without taking further questions after CNN’s Kaitlan Collins tried to press him further on the issue.
National