Trump: Coronavirus will 'get worse before it gets better' 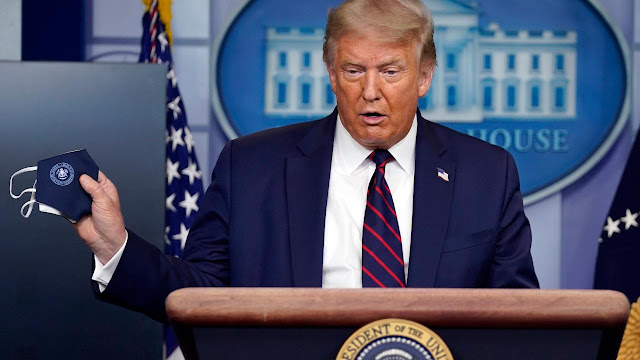 President Trump said Tuesday that the novel coronavirus outbreak in the United States would “get worse before it gets better” amid surges in cases in parts of the country.
“It will probably, unfortunately, get worse before it gets better,” Trump, reading from prepared remarks, told reporters at a White House briefing Tuesday evening. “Something I don’t like saying about things, but that’s the way it is.”
He went on to implore Americans to wear masks, practice physical distancing and wash their hands, and he urged young Americans to avoid bars.
“We’re asking everybody that when you are not able to socially distance, wear a mask,” Trump said. “Whether you like the mask or not, they have an impact. They’ll have an effect, and we need everything we can get.”
The remarks represented a notable shift in tone for the president. Until Tuesday, he had largely downplayed the rise in cases in states like Florida, Arizona, Texas and California, and for weeks he had declined to urge the use of face masks.
The United States has repeatedly set daily records for new coronavirus cases, eclipsing 76,000 new cases on Friday. The country recorded more than 1,000 coronavirus deaths Tuesday, representing the first time since May it has surpassed that grim milestone.
As of Tuesday afternoon, more than 141,000 people had died from COVID-19 in the U.S., according to Johns Hopkins University.
During an interview that aired on "Fox News Sunday," Trump falsely attributed the rise in cases to increased testing capacity and asserted that the U.S. would “put out the flames.”
On Tuesday, Trump acknowledged a “concerning rise” in cases in the western and southern parts of the country while expressing optimism that the federal government and state leaders could meet the challenge. He said his administration is increasing supplies and personnel to states that have seen a surge in cases.
Trump’s appearance — his first coronavirus-focused briefing in almost three months — comes as he faces growing disapproval ratings for his handling of the pandemic. Sixty percent of Americans disapprove of his handling of the coronavirus, according to a Washington Post-ABC News poll released last week.
Trump is also facing an uphill battle for reelection against presumptive Democratic nominee Joe Biden, who leads in national and swing state polls.
The president sought to highlight data that presented a positive picture during Tuesday’s 30-minute appearance, citing the low case fatality rate in the U.S. and the overall decrease in fatalities due to the disease since mid-April. He also said that the length of hospital stays has decreased.
“These trends could change without our continued and relentless focus,” Trump said.
He also described encouraging progress on vaccine research after two potential vaccines showed promising results in early trials. Trump pledged to distribute a viable vaccine in record time, claiming his administration’s actions have saved years of waiting for one.
“Ultimately our goal is not to merely manage the pandemic but to end it,” Trump said. “That is why getting a vaccine remains a top priority.”
The president has been widely scrutinized for his remarks downplaying the threat from the coronavirus, and his administration has been faulted for its lack of a national strategy and for placing the burden on states to handle testing and other challenges.
Trump also resisted wearing a face covering in public or expressing a strong endorsement for masks until recently, when he wore a mask in public for the first time during an appearance to Walter Reed. The Centers for Disease Control and Prevention since April has recommended the use of face coverings as an effective way to prevent individuals from spreading the virus.
Asked Tuesday whether he wanted voters to judge him on his response to the coronavirus, Trump said he would be judged on that “among other things,” including the strength of the economy pre-pandemic.
Trump also said he believed that both he and state governors were responsible for the outcome of the pandemic before adding that the virus came to the U.S. from China.
“I could say I’m fully responsible, but one day we had a virus come in,” Trump said before touting his decision to restrict travel to the country.
The White House is expected to bring back regular coronavirus-related briefings after jettisoning them in late April after Trump made controversial comments suggesting that disinfectant could be used for treating patients with COVID-19.
Trump was not joined by public health officials during his briefing on Tuesday, and it’s unclear whether officials such as Anthony Fauci and Deborah Birx would join him at future briefings. Fauci, the top U.S. infectious disease expert who has faced pushback from some in the White House, told CNN an hour before the briefing began that he was not invited to participate.
Trump indicated before he left the podium that future briefings would touch on other topics, including the economy.
“We’ll be doing these quite often,” the president said.
National