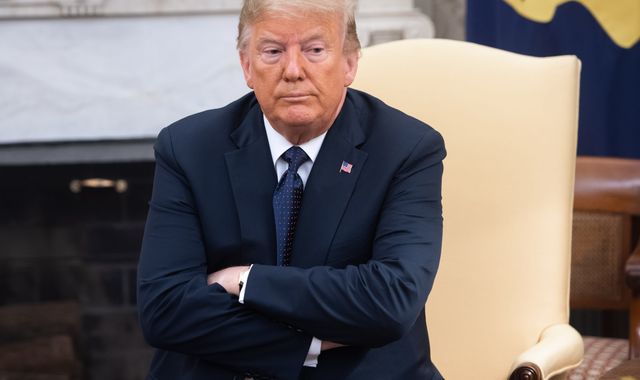 President Trump on Thursday complained that he was being treated unfairly and subject to “political prosecution” after the Supreme Court ruled that New York state prosecutors could subpoena his financial records while blocking Democrats from accessing his tax returns for the time being.
In a series of tweets, Trump also repeated his long-held grievances regarding special counsel Robert Mueller’s investigation into his campaign’s contacts with Russia, which dogged the first two years of his presidency and ensnared six of his associates. He lambasted the investigation as a “witch hunt” and accused the previous administration of “spying” on his campaign.
“The Supreme Court sends case back to Lower Court, arguments to continue. This is all a political prosecution. I won the Mueller Witch Hunt, and others, and now I have to keep fighting in a politically corrupt New York. Not fair to this Presidency or Administration!” Trump tweeted Thursday, less than a half hour after the rulings were issued.
“Courts in the past have given ‘broad deference’. BUT NOT ME!” Trump tweeted.
The justices in a 7-2 ruling upheld a subpoena from Manhattan District Attorney Cyrus Vance for eight years of Trump’s financial records, including personal and corporate tax returns. Chief Justice John Roberts wrote the majority opinion, joined by the liberal justices and Justices Brett Kavanaugh and Neil Gorsuch, both of whom Trump nominated to the bench.
The justices rejected Trump’s claim of “absolute immunity” in the ongoing criminal investigation in New York state led by Vance.
In the second ruling, the Supreme Court blocked House Democrats’ subpoena for Trump’s tax returns, sending the matter back to the lower courts for more consideration of the separation of powers issues related to the congressional subpoena for information belonging to the president. The ruling means that Democrats will not obtain Trump’s records for the time being.
In both cases, Justices Gorsuch and Kavanaugh joined the majorities and fellow conservative Justices Clarence Thomas and Samuel Alito dissented.
As the president expressed his dissatisfaction, his personal attorney Jay Sekulow welcomed the twin rulings, saying Trump’s lawyers planned to raise additional constitutional and legal issues in the lower courts.
“We are pleased that in the decisions issued today, the Supreme Court has temporarily blocked both Congress and New York prosecutors from obtaining the President’s financial records,” Sekulow tweeted. “We will now proceed to raise additional Constitutional and legal issues in the lower courts.”
National