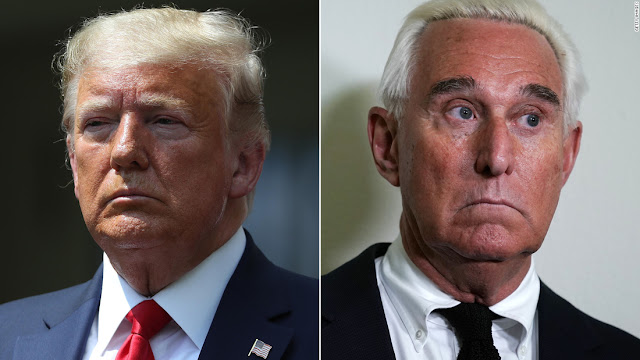 President Trump on Friday commuted the sentence of longtime confidant Roger Stone after the former campaign adviser was sentenced to serve three years and four months in prison.
The decision capped a saga that has roiled the Justice Department and divided some of the president’s advisers. Stone was set to report to prison on July 14, but his allies had lobbied for a pardon or a commutation, citing his risk of contracting coronavirus while in jail.
The move Friday did not come as a surprise, as Trump had at various points in recent months signaled he was leaning toward intervening in Stone’s case.
The president maintained he had not thought about a pardon for Stone, but regularly railed against the prosecutors involved, singled out the Obama-appointed federal judge overseeing the trial for criticism and complained that the conservative provocateur was the victim of a “ridiculous” process.
In recent days, Trump indicated he was likely to act. He told radio host Howie Carr that Stone's prayers for a pardon may be "answered" just before he was set to report to jail.
Stone was the last of six Trump associates to be charged in connection with former special counsel Robert Mueller’s two-year investigation into the Trump campaign’s contacts with Russia. Justice Department leadership moved to reduce Stone’s sentencing recommendation in February in a highly controversial move, leading all four career prosecutors working on his case to quit.
He was convicted in November by a jury in Washington, D.C., of all counts he was charged with, including lying to Congress, witness tampering and obstructing a proceedings.
Attorney General William Barr said in an interview released July 8 that he felt Stone’s prosecution was “righteous.” He did not offer an opinion on the prospect of a pardon for Stone, saying that would be up to the president. Aaron Zelinsky, who was among the prosecutors who quit Stone’s case, testified before Congress in June that the Justice Department treated Stone differently because of his relationship with Trump.
Trump has long railed against the Russia investigation, decrying the process as a "witch hunt" and excoriating the special counsel and FBI for what the president has deemed mistreatment of his allies throughout the process. More recently, he has tried to blame former President Obama and former Vice President Joe Biden, his 2020 Democratic opponent, for what he alleges were nebulous crimes committed against his campaign. Trump accused Obama of committing “treason” in a June television interview but has not provided any supporting evidence.
Stone is the latest high-profile individual with connections to Trump to receive executive clemency. The president earlier this year commuted the sentence of former Illinois Gov. Rod Blagojevich (D) and pardoned former New York City Police Commissioner Bernard Kerik and financier Michael Milken.
Like many of the individuals Trump has pardoned or issued commutations for, Stone had a steady drumbeat of support among presidential allies and Fox news personalities who lobbied for clemency over the course of several months.
There has also been speculation that Trump could move to pardon Michael Flynn, his short-lived national security adviser, who pleaded guilty to lying to the FBI in late 2017 but whose case was dropped by the Justice Department earlier this year in an extraordinary development as prosecutors said they could no longer prove their case. Democrats have accused Barr of political interference in the case.
Flynn’s attorney, Sidney Powell, a frequent conservative presence on Fox News, was among those who advocated on behalf of the pardon for Kerik.
National