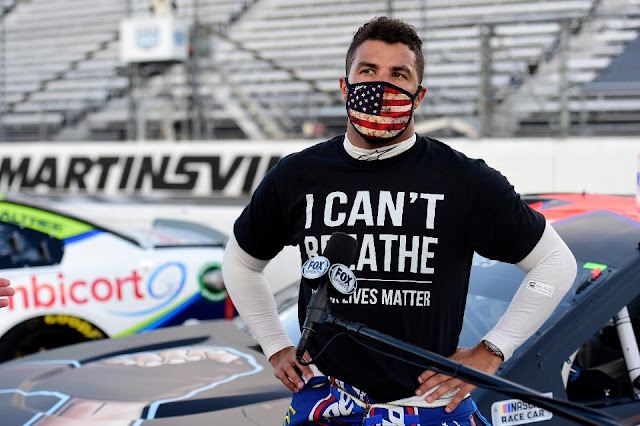 President Trump on Monday chastised NASCAR for banning the Confederate flag from its races and targeted Bubba Wallace, one of the sport's top Black stars, roughly two weeks after a noose was found in the driver's garage stall.
Wallace, who pressed NASCAR to ban the Confederate flag from his venues and has been widely praised within and outside NASCAR, came under attack from Trump, who falsely wrote that the noose found in Wallace's stall was a "hoax."
An investigation concluded that noose had been in the stall for months and that it did not target Wallace, but photos of it made clear it was not a hoax.
"Has @BubbaWallace apologized to all of those great NASCAR drivers & officials who came to his aid, stood by his side, & were willing to sacrifice everything for him, only to find out that the whole thing was just another HOAX?" Trump tweeted. "That & Flag decision has caused lowest ratings EVER!"
NASCAR announced in early June that displays of the flag at its events were banned, saying it "runs contrary to our commitment to providing a welcoming and inclusive environment for all fans, our competitors and our industry."
The announcement came amid nationwide protests over racial injustice in the wake of the police killing of George Floyd.
The tweet marked the first time Trump has weighed in on either the noose incident or NASCAR's decision to ban the Confederate flag, even though both took place weeks ago.
White House press secretary Kayleigh McEnany defended Trump's characterization of the Wallace incident, comparing it to the case of Jussie Smollett, an actor who was indicted last year after authorities in Chicago determined he staged a hate crime.
"What the president is making is a broader point that this rush to judgment on the facts before the facts are out is unacceptable," McEnany said on Fox News.
Trump, who has been an outspoken supporter of NASCAR and attended a race earlier this year, has increasingly dug in on cultural matters in recent weeks as his poll numbers drop.
He spent the Fourth of July weekend delivering a pair of speeches that lionized monuments and statues and decried those who sought to vandalize them or tear them down, and he has threatened to veto a massive defense policy bill over the inclusion of an amendment that would change the names of military installations bearing the names of Confederate leaders.
He previously threatened to release "vicious dogs" on protestors who sought to get to the White House, and just last week retweeted a video of a supporter shouting "white power" at a community in Florida. He later deleted the tweet and the White House said he had not heard the comments.
The noose was found at Wallace's garage at Talladega Superspeedway in Alabama. An investigation later found that a pull rope had been tied into a noose months earlier and that it was not a hateful act targeted at Wallace.
Prior to the conclusion of the investigation, other drivers walked alongside Wallace's car in a show of solidarity. NASCAR has since released photos of the noose, and Wallace expressed appreciation that the sport took the matter seriously.
Tyler Reddick, a NASCAR driver, tweeted in response to Trump's message: "We don't need an apology. We did what was right and we will do just fine without your support."
National