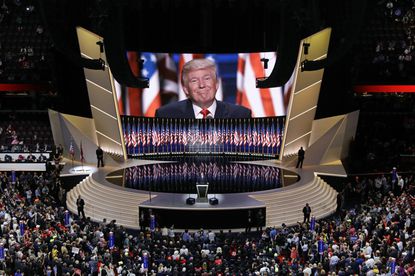 President Trump said Thursday that he would cancel the GOP convention events in Jacksonville, Fla., in August, saying it wasn’t the right time due to the coronavirus.
“I told my team it's time to cancel the Jacksonville component of the GOP convention,” Trump told reporters at a news conference at the White House. “I’ll still do a convention speech in a different form, but we won’t do a big crowded convention per se. It’s just not the right time for that."
Trump cited safety concerns as driving his decision and indicated he didn’t want to be the subject to negative media scrutiny for holding the convention events.
The president said the official nomination business would still take place in Charlotte, N.C., as planned, but didn’t offer further details on his expected speech. He said the party would hold “tele-rallies” and other online events the week of the convention in late August.
The decision marks a striking reversal for the president, who has pressed for months to have a full-scale nominating convention amid the coronavirus pandemic despite warnings from public health experts.
The convention was initially scheduled to take place in Charlotte but the Republican National Committee (RNC) moved the major celebratory events, including Trump’s speech formally accepting the party's nomination, to Jacksonville after the president objected to North Carolina Gov. Roy Cooper’s (D) insistence that the event be scaled down.
Health experts have warned against large gatherings, particularly those staged indoors, and Trump has faced criticism for holding a campaign rally in Tulsa, Okla., in June at which few people were seen wearing face coverings.
Trump said Thursday he made the decision to cancel the Jacksonville portion of the convention during a meeting with his political team earlier in the day.
“I looked at my team and I said, the timing for this event is not right. It’s just not right with what’s happened recently, the flareup in Florida, to have a big convention, it’s not the right time,” Trump told reporters. “For me, I have to protect the American people.”
Florida has been among the states that have seen a worrying surge in coronavirus cases in recent weeks. The Sunshine State reported a record number of daily fatalities on Thursday as the total number of coronavirus infections in the United States surpassed 4 million.
The convention plans have been shrouded in uncertainty as a result of the pandemic and the abrupt decision to move many of the high-profile events to Jacksonville. Trump acknowledged earlier this month that Republicans were “flexible with their plans,” while a handful of GOP senators said they weren’t planning to attend the convention and others expressed hesitation, including Senate Majority Leader Mitch McConnell (R-Ky.).
Just last week, RNC Chairwoman Ronna McDaniel informed members that the party would limit the attendees to only regular delegates for the first three days, capping the crowd at roughly 2,500 people. The crowd for Trump’s speech was expected to be capped at roughly 6,000 to 7,000 people. The events were expected to take place both indoors and outdoors.
Trump largely downplayed surges in cases until this week, when, facing growing disapproval for his handling of the virus, he warned that the pandemic was likely to “get worse before it gets better.”
One would-be attendee to the convention posited that the decision to cancel it was a sign that Trump had realized the need to change the course of his approach to the coronavirus.
“It was probably inevitable that events in Jacksonville were going to be canceled, the president was right to make it his call and put a plug in the criticism,” the person said.
National