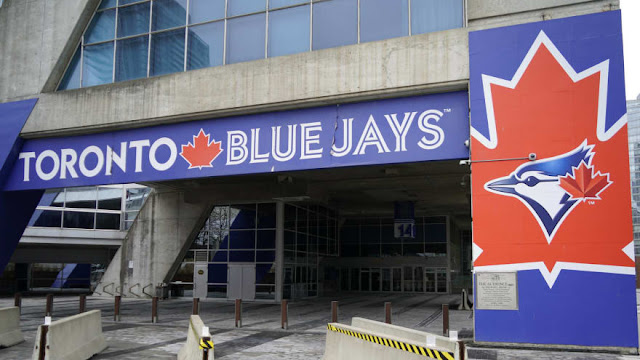 The Canadian government denied the Toronto Blue Jays from playing games this year in the country over safety concerns for players traveling to and from the United States as COVID-19 cases surge in America.
Immigration Minister Marco Mendicino said Saturday the Canadian government would not allow the team to play at Rogers Centre, according to The Associated Press.
The Blue Jays were granted permission by the city of Toronto and provincial governments to play in their home stadium, but they were still waiting on a decision from the federal government.
Mendicino said the primary issue blocking the games from happening was the surging cases of COVID-19 in the United States.
"There were serious risks if we proceeded with the regular-season proposal of the MLB and the Jays and therefore we concluded it was not in the national interest," Mendicino said. "I get that some people will be disappointed but this decision can't be taken as a fan. It is taken on behalf of the health and safety of Canadians."
Cases in the U.S. have surged with record daily highs, with the country recording more than 75,000 new cases in a single day Thursday. States in the South and West have also broken their own records, with Florida and Texas recordings more than 10,000 cases per day in the past few weeks.
The other 29 MLB teams plan to play games without fans when the abbreviated 60-game season begins July 23.
"Though our team will not be playing home games at Rogers Centre this summer, our players will take the field for the 2020 season with the same pride and passion representative of an entire nation," Blue Jays President Mark Shapiro said in a statement. "We cannot wait until the day comes that we can play in front of our fans again on Canadian soil."
The team is slated to begin the season on July 24 at Tampa Bay.
Sports