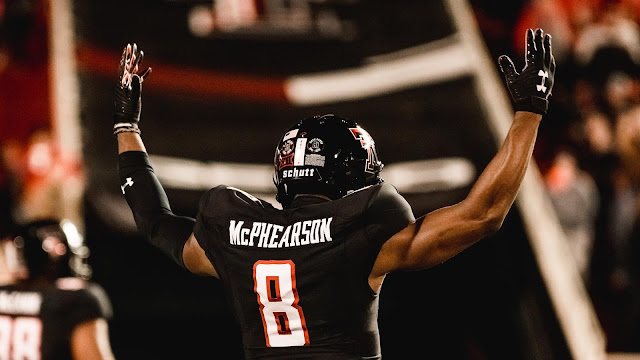 On Thursday, Tech senior defensive back Zech McPhearson was added to the Wuerffel Trophy Watch List. The recipient of this award recognizes athletes that go above and beyond to help both their communities and others.
The original list of candidates will be cut to semifinalists on Nov. 3, and from that list, finalists will be chosen on Nov. 23. The winner of the Wuerffel Trophy will be announced during the National Football Foundation’s festivities in New York City on Dec. 8.
In just his first year as a Red Raider, McPhearson took to local children’s hospitals and elementary school reading programs as a steadfast volunteer in Tech’s community service initiatives. In fact, most recently, he recorded videos for numerous young students encouraging their education after being impacted by COVID-19.
As impactful as McPhearson is off the field, he is equally as consistent on the field. As one of four players on Tech’s roster to start in all 12 games, McPhearson had a 51-tackle junior campaign at the cornerback position. On the aerial attack, he split a team-high five pass breakups with DaMarcus Fields.
Heading into his senior year, McPhearson will look to continue being a positive reflection of himself and the Red Raiders both on the field and in the community.
Sports