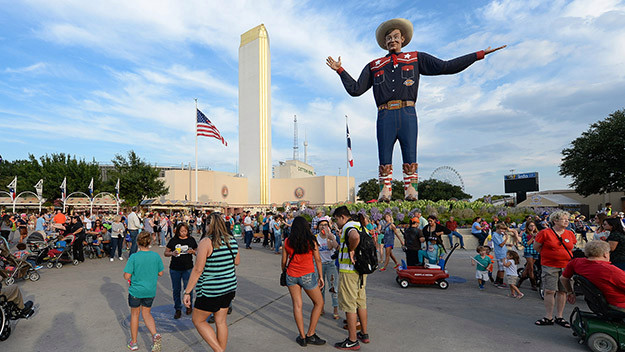 The Texas State Fair has been canceled, the first time since World War II that the annual Dallas event won't be held.
“This was an extremely tough decision. The health and safety of all involved has remained our top priority throughout the decision-making process,” Gina Norris, chair of the fair's board of directors, said in a statement. “One of the greatest aspects of the Fair is welcoming each and every person who passes through our gates with smiles and open arms. In the current climate of COVID-19, there is no feasible way for the Fair to put proper precautions in place while maintaining the Fair environment you know and love. While we cannot predict what the COVID-19 pandemic will look like in September, the recent surge in positive cases is troubling for all of North Texas."
The Lone Star State is one of several in the country that has seen a spike in new COVID-19 cases. Over the past two weeks, Texas has broken its record for daily number of new cases multiple times, reporting 8,258 new cases on Friday. On Monday, it reported 5,318 new cases, bringing its total number of confirmed cases during the pandemic to more than 200,000.
Gov. Greg Abbott (R) has re-closed bars across the state and made wearing masks while in public a requirement for all Texans.
The Texas State Fair noted that whether or not the annual college football games between Texas and Oklahoma and Prairie View A&M University and Grambling State University would be played will be determined by the NCAA. Both of the games are usually played in September in the historic Cotton Bowl, which is located on the fairgrounds.
Texas