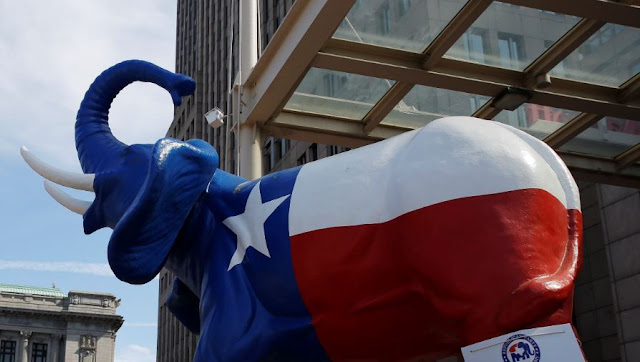 The Texas GOP is suing Houston Mayor Sylvester Turner (D) for canceling its in-person convention scheduled for next week amid the coronavirus pandemic.
Texas GOP chairman James Dickey signaled that such a move was coming in a statement following Turner's announcement Wednesday, saying that the party would "evaluate all legal remedies available to us to fight back against the unequal treatment Mayor Turner has chosen to inflict on conservatives."
The party's convention was scheduled for July 16-18 in the George R. Brown Convention Center in downtown Houston.
Turner said that he told the Houston First Corp., which operates the convention center, to cancel its contract with Texas Republicans.
The mayor has insisted that the move wasn't political, citing the spike of COVID-19 cases in Houston and across the state.
“[The] Houston health department has done everything they could to try and outline a series of things that could be done to make it safer but then came to the conclusion that even if you did all of those things, it still would not prevent this convention from being a clear and present danger to the employees, to the delegates, to the people in Houston, to the cities and towns from which they come,” Turner said at a briefing.
"After all of that, if you still refuse to recognize the public danger to everyone involved, then I am still the mayor,” he added.
Dickey pointed out that Turner has made no effort to stop thousands of people from staging protests sparked by the police killing of George Floyd at the end of May.
Turner didn't seem fazed by Dickey's argument, tweeting, "It is one thing to be talking about an indoor convention where people are in close proximity with each other for a substantial amount of time rather than walking outside in a protest."
The convention was expected to draw 6,000 people from across the Lone Star State.
In the past two weeks, Texas has set new records for its daily number of new coronavirus cases multiple times, most recently on Tuesday when it reported 10,028 new COVID-19 cases.
Conversely, Texas Democrats held their convention virtually at the beginning of June.
Texas