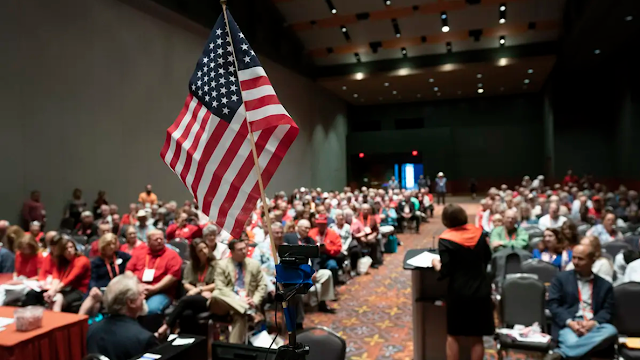 By Cassandra Pollock
The Texas GOP’s plan for an in-person convention next month in Houston is looking increasingly uncertain as criticism mounts over plans to host thousands of people indoors as the new coronavirus surges across the state.
Party Chair James Dickey said Tuesday that the State Republican Executive Committee will meet Thursday to consider options for the future of the event, which he assured includes an “ultimate contingency plan” to move the event online.
"We have prepared for an online convention as the ultimate contingency plan if we are forced by a government order at any level and not able to hold our convention in person,” Dickey said during a livestreamed announcement Tuesday evening. “We’ve had that plan in place since the beginning of the pandemic so that we can be fully prepared for any turn of events.”
The State Republican Executive Committee, a 64-member body including Dickey and Vice Chair Alma Jackson, could take action ranging from mandating masks at what is expected to be a roughly 6,000-person event to relocating it to another city or moving the convention online.
Dickey’s announcement came hours after the Texas Medical Association, the state’s largest medical group, called on the state party to cancel plans for an in-person convention in one of the country’s coronavirus hot spots. The reversal happened one day after The Texas Tribune reported on the group’s sponsorship of the biennial event, which is set to happen July 16-18 at Houston’s George R. Brown Convention Center. Attendees there are expected to select delegates for the national convention, vote on the party’s platform and elect the party’s next leaders, among other things.
Houston, the state’s largest city, is in Harris County, which is home to the highest number of cases and deaths related to the virus in Texas. And while local officials there have mandated that mask are worn in businesses until August, Houston Mayor Sylvester Turner said party officials can control the rules of their own convention.
Turner, who according to the Houston Chronicle recently removed his authority to cancel the convention, said Tuesday “that is in the GOP’s hands to put in place safety protocols that adhere to the Governor‘s Order and the CDC [Centers for Disease Control and Prevention] guidelines,” according to a spokesperson for the mayor.
Gov. Greg Abbott, who has granted local officials the power to restrict outdoor gatherings of more than 100 people, could issue an additional executive order related to indoor gatherings, which would likely address whether the convention in Houston could proceed as planned. A spokesperson for the governor did not immediately respond to a request for comment.
Meanwhile, Republicans at the Legislature, many of whom often attend the state convention, are split on whether this year’s event should continue as planned in Houston.
State Rep. Sarah Davis, a Houston-area Republican, said it seemed “incredibly irresponsible” to hold such a large gathering and said she does not plan to attend this year’s event.
“I think it’s a horrible idea to proceed with holding the in-person convention,” Davis told the Tribune on Tuesday. “Houston is the last place we need to have a crowd of 6,000 gathering, given our COVID-19 positivity rate increases.”
Other Republicans, such as state Sen. Bob Hall of Edgewood, have brushed aside such concerns, arguing instead that Texans should return to some sense of normal in an effort to prevent further damage to the economy.
“Canceling the convention sends the exact opposite message that Republicans should be sending,” Hall said in a statement Tuesday. “There is no reason to cancel a gathering that will help unite Republicans behind a limited government platform.”
That rub among Republicans is all but certain to play out Thursday among SREC members, who represent various factions of the party. The Texas Democratic Party, which held a virtual convention earlier this month, has criticized its Republican counterpart repeatedly over moving ahead with plans to host an in-person event. In a statement to the Tribune on Tuesday, spokesperson Abhi Rahman said the GOP should have moved to a virtual convention "months ago," but instead "decided to bury their heads in the sand and watch as our state became ravaged by the coronavirus."
Before calls to cancel the convention began, party officials had already outlined several actions they were taking in an attempt to make the event safer. Kyle Whatley, the party’s executive director, said during a recent tele-town hall that the convention center would be filled with hand sanitizer stations and signage with reminders for people to wash their hands. There will also be social distancing markers for lines, he said.
Dickey said Tuesday that party officials have been working on ensuring that “encrypted secret ballot voting” and “credentialed verification” could happen, should the convention move to an online setting.
Such voting would include the race for chair, which features Dickey and Allen West, a former Florida congressman who moved to Texas several years ago. West told the Tribune on Tuesday that he did not plan to weigh in on whether an in-person convention should happen until after party officials decide next steps.
“I will just wait until the decision is made,” West said, “and then I will weigh in if I need to.”
This article originally appeared at the Texas Tribune.
Texas