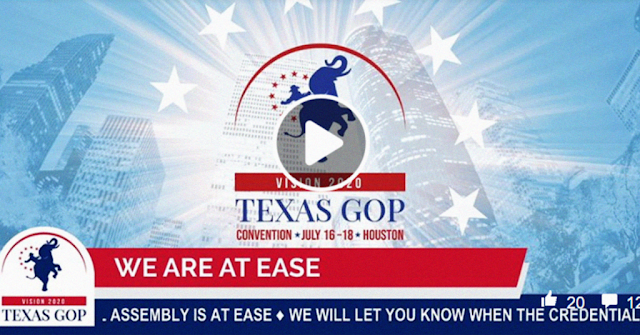 Getting the virtual state convention up and running “has not been a walk in the park,” said Republican Party of Texas Chair James Dickey in a Facebook Live chat Wednesday evening.
Glitches related to credentialing had yet to be ironed out Thursday, preventing the party from initiating the business at hand. The live feed displayed text stating “We are at ease” and that everyone would be notified when the credentialing emails had been sent.
The frustration was evident in the social media comments.
“Has anyone received their credentials,” asked one person.
“We didn’t get ANYTHING after the registration confirmation. Feeling shut out & silenced,” posted another person.
“Still no credentials … This is crazy,” wrote a third delegate.
And yet another participant had words of blame for the party’s executive committee, writing, “If you weren’t watching during the last couple of SREC meetings, you should watch them. It is the failure to act that has brought us to this online meeting. Three and a half hour meeting to decide nothing. See which SREC were driving the train off the cliff by their interruptions and antics. If SREC members can’t remember parliamentary procedure, Heaven help us when it comes to the meeting of the convention. If SREC can’t properly use the system, who will thousands of others. Like always, in was not everyone’s fault. See if you were happy with your SREC’s interruptions and actions. Maybe yours were good ones … maybe yours needs to be changed. Make that decision while we wait.”
Never wanting to miss an opportunity to poke at the competition, the Democratic Party of Texas sent out a news release encouraging reporters to watch reruns of last month’s Democratic state convention while waiting for the GOP to fix its technical glitches.
The GOP’s first general meeting and candidates speeches was supposed to begin at 9 a.m., followed by the first Senate district caucus at 1 p.m., the first Congressional district caucus at 3 p.m., committee meetings at 6 p.m. and a welcome event at 7 p.m.
The party was asked repeatedly to shift to an online convention before the decision was made for them last week by Houston Mayor Sylvester Turner, who feared increased spread of COVID-19 if the in-person meeting occurred at Houston’s George R. Brown Convention Center.
As late as Monday, the party was still trying in the courts to win approval to proceed with the in-person event. The Republicans were denied at every turn.
Texas