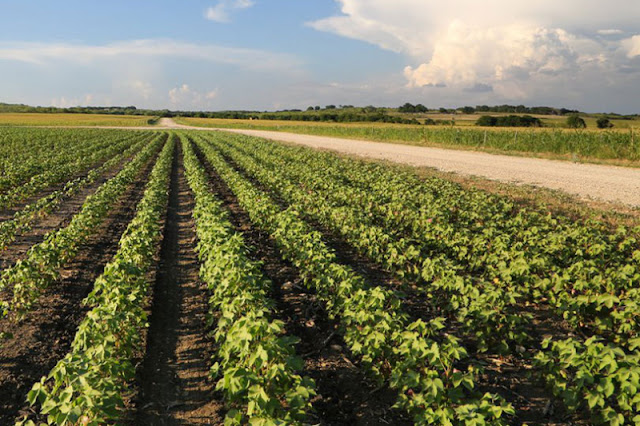 By Jennifer Dorsett
According to Texas A&M AgriLife Extension Service Integrated Pest Management (IPM) agents across the state, hot days and low insect pressure would be great for cotton farmers—if they get some moisture.
In the northernmost area of the state, cotton farmers faced a dry start, then were hit by high winds. But the cotton that survived is facing fairly light insect activity, AgriLife Extension agent for Hockley, Cochran and Lamb counties Kerry Siders said.
“This heat has suppressed quite a few of the pests,” Siders said. “We’re picking up an occasional fleahopper but most of these we’re seeing along weedy field margins, bar ditches and other areas. We hope those weedy areas will hold their attention.”
He urged farmers to leave bar ditches and other weedy non-crop areas as-is, saying pests were likely to stay in those areas if left undisturbed.
Extreme heat has started taking its toll on the area’s cotton crop, so irrigation is critical, he added.
In Hale and Swisher counties, fleahopper, lygus and false chinch bugs have been spotted in local fields, but not at levels that require spraying, according AgriLife Extension IPM Agent Blayne Reed. He reminded farmers to continue scouting vigilantly for fleahoppers, because fleahopper infestations can cause square loss.
The first bloom should take place in late July for most of the Texas Plains area, Siders said.
Moving down to the Edwards Plateau, AgriLife Extension IPM Agent Brad Easterling, whose area encompasses Glasscock, Reagan and Upton counties, said the extreme heat and dryness was starting to affect area cotton. Rain is needed soon to mitigate the effects of the salinity of the region’s groundwater, he added.
“One thing that really affects us is how salty our water is. We always need rain to supplement our irrigation to maximize our crops,” he said. “These plants are basically living on salt water, so you can water them all you want, but they continue to stay thirsty out here. The cotton’s not growing. It’s just sitting there.”
Some wind- and hail-damaged crops in the Edwards Plateau are recovering from the storms in June, but the plants look marginal at best, area IPM Agent Haley Kennedy said.
Kennedy oversees AgriLife Extension Service IPM activities in Runnels and Tom Green counties.
“Fleahopper populations are building but still below economic thresholds,” she said. “We’ve seen some aphids in some irrigated fields, but nothing at economic thresholds. We just need rain.”
AgriLife Extension IPM Agent Tyler Mays covers Hill and McLennan counties, where he said cotton is in peak bloom.
Timely rains have the crop “growing nicely,” and while insect activity has been low, spider mites are starting to move into the region’s cotton fields as corn plants begin to dry out.
“Bollworm moth activity in area cotton fields has been increasing, and it looks like we could see [an upcoming] heavy egg lay,” Mays wrote in the weekly Blacklands IPM update.
Good populations of beneficial insects combined with Bt technology and current environmental conditions should dampen any major bollworm issues, he said.
Traveling further south to the Upper Coast and Coastal Bend areas, cotton growth is in a more advanced state, according to Wharton County IPM Agent Kate Crumley.
“Things are looking pretty good. We’ve got our first cracked cotton boll here this week, so we will see the finish line at some point,” Crumley said. “The pest pressure in our cotton has honestly been pretty low. We’ve seen some people spraying for stinkbugs, but bollworm pressure has been very low.”
Mid-Coast cotton crops are in mid-bloom to active bolls, according to Calhoun, Refugio and Victoria counties IPM Agent Stephen Biles.
“Our pest abundance seems to be picking up a little bit. We’re finding some bollworm injury in some of the Bt cotton,” he said. “But our non-Bt cotton had 10-15 percent damaged fruit from worms, and stinkbug feeding in a few fields was up to 40 percent. But a lot of fields are two and three nodes above white flower, so they’re past the stinkbug stage.”
In the Rio Grande Valley, cotton insect pressure has been heavier, IPM Agent Danielle Sekula said.
Verde plant bug populations have migrated from grain sorghum to cotton fields as sorghum harvest began. According to Sekula, these pests will pierce immature bolls and cause damage ranging from boll malformation to complete fruit loss.
She advised cotton farmers to be vigilant when scouting for the highly destructive pests and to begin spraying fields as soon as populations reached treatment thresholds.
Sekula added increased whitefly pressure remains a concern in the Valley.
As of July 6, more than half of the state’s cotton crop was rated in fair to very poor condition, according to the U.S. Department of Agriculture’s National Agricultural Statistics Service.
Continuing degradation of cotton crop conditions are a reflection of increasing drought across the state.
Most areas of the state are seeing continued expansion and intensification of drought, Texas Water Development Board Hydrologist Mark Wentzel wrote in his weekly drought report.
“June rainfall has been less than normal for much of the state, leading to many areas experiencing at least one class of drought degradation,” Wentzel said. “Some areas of the Panhandle and Central and West Texas experienced two classes of degradation.”
Farm and Ranch Local News