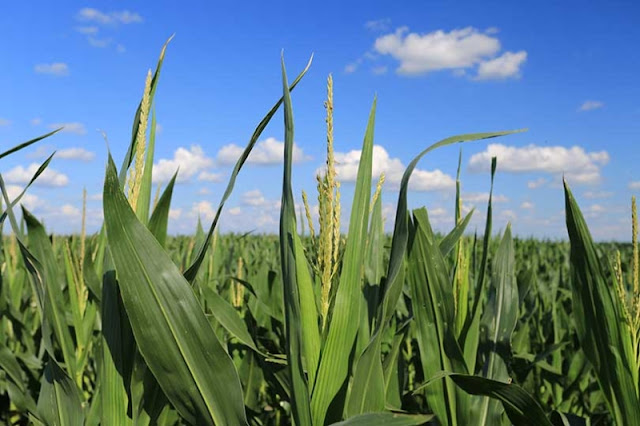 By Jennifer Dorsett
It’s been an unusual season for corn disease, according to Texas A&M AgriLife Extension Service Plant Pathologist Thomas Isakeit.
The fungal disease northern corn leaf blight has been prevalent, moving from South Texas northward throughout the season.
Exserohilum turcicum, the fungus which causes northern corn leaf blight, grows best in moderate environmental temperatures with heavy dew and frequent rainfall. Long, elliptical tan lesions develop first on lower leaves, then progress up the plant.
In Texas, the disease generally doesn’t progress past the first stage in which lesions develop on lower leaves, according to Isakeit.
“In a typical Texas growing season, infrequent rain and increasing temperatures will hinder the fungus,” he said in a Texas Row Crops Newsletter post.
But this year, weather conditions early in the season were favorable to the disease, and Isakeit said there was more disease development in susceptible hybrids.
There was a higher prevalence of the disease in corn grown on land without crop rotation, he added. The pathogen carries over to the next season in crop residue, so in severe cases, Isakeit recommendes rotating the field out of corn the following year and plowing under crop residue to hasten decomposition.
Farmers have asked about the need to apply fungicide to prevent northern corn leaf blight, but it is normally such a minor disease in Texas that no studies exist that define the benefit of a fungicide application for the area, Isakeit said.
“In the Midwestern U.S., yield loss can occur if there is a substantial amount of disease at the time of silking. If high levels of disease are delayed until several weeks after silking, there is minimal disease loss,” he said. “Until there is more data for Texas, the trigger for a fungicide application would be increasing disease development in a susceptible variety near or at silking, with a forecast of future rainy weather.”
He added fungicide application would not be necessary for this disease later in the season.
Another unusual aspect of this growing season is the development of charcoal rot in areas where northern corn leaf blight was prevalent.
Isakeit said charcoal rot is a soilborne fungal disease more typical in Texas climates. The early appearance of the disease was unusual, but its appearance did coincide with extended dry weather conditions, he said.
In the field, a few dying plants surrounded by plants that are still green is a common indicator of charcoal rot. Isakeit noted the disease is easy to diagnose in the field by slitting corn stalks lengthwise near the base to check for rot along with the small black survival structures of the fungus called microsclerotia.
“Sometimes, however, plant death is so rapid that microsclerotia haven’t formed yet,” he said. “In that case, plants should be checked a few days later.”
Charcoal rot is triggered by moisture stress, especially in plants that may not have yet developed extensive root systems, sometimes due to frequent rains.
While all hybrids are most likely susceptible to fungal infection, Isakeit noted symptom development might be restricted in hybrids better adapted to survive moisture stress.
Dryland corn crops have limited water management options, but cultural practices to reduce moisture stress are helpful including a lower plant population and elimination of soil compaction.
Isakeit added crop rotation is not effective for managing charcoal rot.
Also early in the season, alongside northern corn leaf blight, farmers found common rust disease.
This disease is also driven by rain and cool temperatures early in the season, but its presence doesn’t threaten corn yields in Texas, according to Isakeit.
But the disease southern corn rust does threaten yields in susceptible hybrids, especially those planted late, he said. Southern rust has been spotted in South and Central Texas corn crops.
Currently, South Texas corn is at a stage of maturity where the disease is no longer cause for concern, but Isakeit said there may still be corn in Central Texas at milk stage or younger, which may be vulnerable to yield loss.
“The fungus does not survive on crop residue. Spores are blown into fields from other areas of corn production,” he said. “In Texas, the progression is from south to north. In addition to rain as a factor, in disease development, the disease can be more severe in furrow-irrigated corn.”
Farm and Ranch