Tax cut or stimulus checks: GOP may have a choice to make 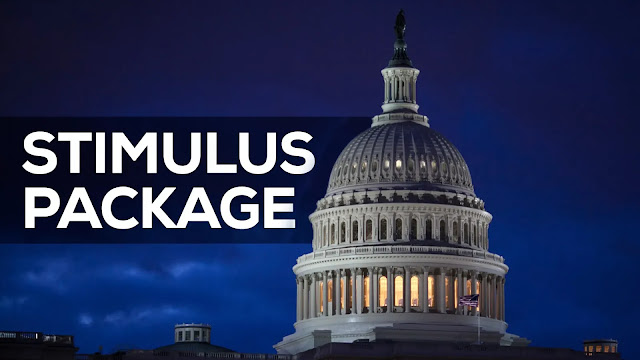 Senate Republicans are badly divided over whether to include stimulus checks or a payroll-tax cut in the new coronavirus relief package.
Some GOP senators warn that to stay around $1 trillion for the Republican bill they might have to pick between the two priorities, both of which have vociferous supporters and detractors.
As Republicans face pressure to keep the overall cost of the measure down, they are facing a difficult choice.
“I think it gets complicated to try and do both, for sure, because you’ve got a limited amount of head room that you’re trying to work with here,” said Sen. John Thune (S.D.), the No. 2 Republican senator. “I think in the end it’s probably going to come down to where the votes are and maybe picking and choosing.”
Senate Finance Committee Chairman Chuck Grassley (R-Iowa), who characterized a payroll-tax cut as a political and PR headache, said, “I don’t think you can fit them both in.”
Sen. Roy Blunt (Mo.), a member of GOP leadership, questioned how Republicans could do both and still fit in a laundry list of other priorities.
“I think both the direct payments and the ... elimination of payroll taxes would be a pretty big part of the package, either one would be. Both of them would be, my guess is, challenging to do and do much else under [a] trillion dollars,” he said.
If Republicans have to pick either checks or a payroll-tax cut, it could pit GOP senators against the White House, as President Trump is clamoring for the latter. And some senators have warned that even if a payroll-tax cut makes it into the first draft, it could still ultimately be removed.
Senate Majority Leader Mitch McConnell (R-Ky.) has said Republicans want another round of direct assistance checks. He indicated during a floor speech this week that it would be in the forthcoming proposal but declined, during a weekly press conference, to say what the details of that provision would be.
A payroll-tax cut, however, is one of Trump’s first priorities.
“I think it’s a very important thing. ... I think it’s an incentive for companies to hire their workers back. ... A payroll-tax cut, to me, is very important,” Trump told reports about the idea at the White House this week.
The White House has been pushing for months to do a payroll-tax cut. As part of a concession to the White House, Congress waived the part of the payroll tax that employers pay into the Social Security Trust Fund through the end of the year as part of the March bill.
House Minority Leader Kevin McCarthy (R-Calif.), Treasury Secretary Steven Mnuchin and White House chief of staff Mark Meadows have each indicated that the payroll-tax cut will be a part of the coming Republican proposal.
But Mnuchin, asked if it had to be in there, hedged, telling reporters “we’ll see.” And McConnell, during a weekly press conference, was more circumspect, describing it as an unresolved point of discussion with the administration.
“There are some differences of opinion on the question of the payroll-tax cut and whether that’s the best way to go, and so we’re still in discussion with the administration on that,” he said.
One idea would be to scale both of the proposals down and try to include both, potentially either through smaller checks and a partial payroll-tax cut or to make the payroll-tax cut a deferral, which would help with the immediate cost of the bill but have to be paid back later.
“We’re challenged on … how big can the stimulus checks be if you’re also doing the payroll-tax cut,” said Sen. Kevin Cramer (R-N.D.).
Asked if he thought Republicans needed to pick, he added: “Either that or the checks are smaller and the tax cuts are more modest.”
Republicans could also bust the roughly $1 trillion spending limit, something some senators expect will happen inevitably given how the price of other coronavirus bills creeped up during negotiations. But a growing number of Republican senators say they are concerned about the impact of the roughly $3 trillion already appropriated by Congress on the nation’s debt.
Sen. Ted Cruz (R-Texas) questioned the spending during a closed-door lunch this week, asking his colleagues, “What in the hell are we doing?” Sen. Rand Paul (R-Ky.) compared his Senate Republican colleagues to a meeting of the “Bernie bros.”
Sen. Mike Braun (R-Ind.) warned that if GOP leadership agrees to go above $1 trillion, they’ll risk losing conservatives, who are squeamish about the price tag.
“If it ... gets beyond that, you’re going to lose a lot of conservatives,” Braun said. “I just think that’s going to be a hard threshold point where you get a lot of people starting to squirm.”
But the debate divides GOP senators because both ideas face opposition from some parts of the caucus.
Some Senate Republicans have appeared skeptical about the need for a second round of checks. The first bill included a one-time check of $1,200 for individuals who make up to $75,000 per year.
“I’m not sure that’s the best use of the money. ... That was a temporary measure in my view because of the lifeline we needed to give people who had no income. And now they’ve presumably had an opportunity to apply for and receive unemployment compensation,” said Sen. John Cornyn (R-Texas), who has also warned that a payroll-tax cut isn’t practical.
GOP senators including Lindsey Graham (S.C.), Steve Daines (Mont.) and Marsha Blackburn (Tenn.) have said they would support a payroll-tax cut.
But the idea has several critics within the caucus. Thune noted that while stimulus checks have their own detractors, there is probably more support for them over a payroll-tax cut.
“There are people who aren’t for the checks either, but my sense is ... there’s not much, I would say, support for the payroll-tax cut,” Thune said. “There is considerable support for stimulus checks if we’re going to do something on an individual, personal level.”
National