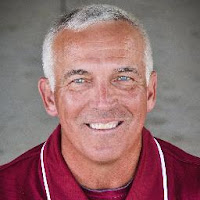 West Texas A&M has named Russ Martin as its offensive coordinator, head coach Hunter Hughes announced on Wednesday afternoon. Martin comes to Canyon with 41 years of coaching experience, 34 of those at the collegiate level.
"Russ brings a wealth of knowledge and experience on the offensive side of the ball," Hughes said. "We are looking forward to having him here at West Texas A&M and running our offense."
Martin makes the move to Canyon after serving as the head coach at Colorado Mesa for eight seasons posting a 56-33 record.  He led the Mavericks to three Rocky Mountain Championships and one NCAA Appearance during his time in Grand Junction.
"I am very excited to come to WT. I went against Hunter for years and it is a great to be a part of his staff," Martin said. "I am looking forward to being a part of what he is building here in Canyon with the coaches he has brought in, the players on the team and the culture they have been establishing."
Under Martin, the Mavericks owned one of the best offenses in the nation ranking in the Top 10 nationally in total offense from 2016-17 while compiling a record of 18-5 including 17-3 in RMAC play.
In 2016, Martin led the Mavericks to their first playoff appearance since 2007 as they ranked ninth in total offense (507.3/yards) while scoring 41.3 points per game, the 11th most in NCAA DII football. David Tann ranked first in the RMAC and second in the nation with his 20 rushing touchdowns en route to earning to Second Team All-RMAC honors.
"We have always been a high scoring offense where I have been," Martin added. "We have to make sure that we can get our players to understand the whys of what we are doing. We will be running the football; all of our stuff starts with running the ball."
Martin orchestrated one of the top offenses in the country in 2017 led as the Mavericks scored 46.4. points per game, the second-most in the. Nation. They also averaged 489.3 yards per game, 257.8 of those coming on the ground led by RMAC Offensive Player of the Year, Eystin Salum. The Denver, Colo. native had over 3,300 yards of total offense and 33 touchdowns as CMU finished the season 9-1 in conference play.
Prior to joining the staff at CMU, he spent eight seasons as the offensive coordinator and quarterback coach at Nebraska-Kearney. The Lopes won four RMAC Conference Championships and was ranked nationally. He also spent time at Baylor, Kansas Wesleyan, Bethany College, Black Hills State and Southeastern Missouri State during his career.
He played football at Chadron State where he earned a bachelor's degree in physical education with a minor in business administration and a coaching endorsement. He later earned his master's degree in secondary education.
Sports