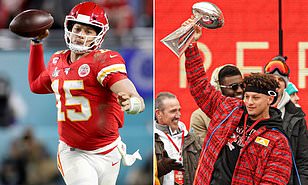 ESPN reported Monday that former Texas Tech great and reigning NFL Super Bowl MVP Patrick Mahomes II will sign the richest contract in league history after agreeing to a 10-year extension with the Kansas City Chiefs.
According to ESPN insider Adam Schefter, the agreement adds on to the already two years remaining on Mahomes' contract, locking him with the Chiefs through the 2031 season. The deal is worth up to $503 million over that span, easily the highest contract not only in NFL history but in all of sports.
In just three years since departing Texas Tech as one of the top quarterbacks in school history, Mahomes has taken over the NFL, leading the Chiefs to the AFC Championship Game in his first season as a starter in 2018 and then to a Super Bowl victory this past February.
Along the way, he's picked up every award imaginable from NFL MVP to Super Bowl MVP. He's also graced the cover of Madden NFL 20, the popular video game from EA Sports, all while directing one of the most explosive offenses in NFL history.
Mahomes, 24, became the first quarterback under the age of 25 to be named NFL MVP and also win a Super Bowl after Kansas City came back from a 10-point deficit in the fourth quarter to top the San Francisco 49ers this past season. It marked the Chiefs' first Super Bowl title since 1970.
Mahomes garnered NFL MVP honors after the 2018 season where he led the league with 50 touchdown passes and threw for 5,097 yards. He has thrown for 9,412 yards and 76 touchdowns with only 18 interceptions over his short career, which spans 31 regular-season games and five playoff starts.
This is actually the second time in school history where a Red Raider has signed the richest NFL contract as Ring of Honor member Donny Anderson previously did so with the Green Bay Packers upon being drafted in 1965.
Sports