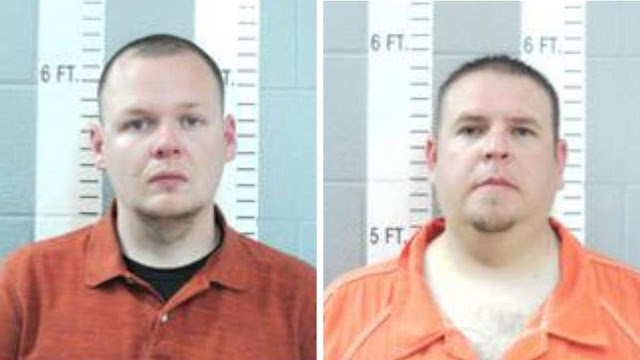 Two Oklahoma police officers have been charged with second-degree murder almost exactly one year after a July 4 incident in which they allegedly used Tasers on a man more than 50 times before he died.
Wilson Police Department officers Joshua Taylor, 25, and Brandon Dingman, 34, were charged in connection with the death of 28-year-old Jared Lakey, the Oklahoma State Bureau of Investigation (OSBI) announced Thursday.
The officers turned themselves in to the Carter County Sheriff’s Office. They were released on $250,000 bonds on Thursday.
If convicted, they could face sentences of 10 years to life in prison.
Wilson Chief Kevin Coley said on Friday that the officers were placed on paid, administrative leave after the charges were announced, pending a termination hearing with the mayor and city council.
Due to the July 4 holiday weekend and the ongoing coronavirus pandemic, it is unclear when the hearing will take place. However, Coley estimated that it could be as early as next week.
Taylor has been with the department since June 2016 and was serving as acting chief at the time of the incident. Dingman had worked in the department since April 2012.
Shortly before midnight on July 4, 2019, Taylor and Dingman responded to a call involving Lakey allegedly “acting in a disorderly way.” When he did not comply with the officers’ commands, Taylor and Dingman used their stun guns multiple times, the state law enforcement agency said.
Lakey was reportedly shocked with a stun gun dozens of times within a nine-minute time frame.
Dingman allegedly "deployed his taser 23 times with a cumulative total of 114 seconds of tasing activity," according to court documents obtained by The Ardmoreite newspaper. Taylor allegedly "deployed his taser 30 times for a cumulative total of 122 seconds of tasing activity."
Shortly after being shocked by the stun gun, Lakey stopped breathing and became unresponsive. He was admitted to a hospital in Healdton, Okla., before being transferred to an Oklahoma City facility. He died July 6.
Carter County Sheriff Chris Bryant requested that an agent with the OSBI investigate the use of force incident, according to the outlet.
An affidavit from the agent states that body camera footage captured the incident and Lakey never struck, grabbed or made any aggressive move toward either officer during the nine-minute-long stun gun incident.
The agent further states that neither officer ever attempted to control the man by placing their hands on him, which went against the methods taught in their training.
“The footage reveals numerous instances of both officers using their X26P tasers to send electrical shocks through [the victim’s] body in an apparent attempt to persuade him to put his hands behind his back as he lay on the ground,” said the agent, according to court documents.
Court records obtained by The Ardmoreite allege that the force used by Taylor and Dingman was not necessary and referred to the use of Taser as an “excessive amount” that reportedly contributed to Lakey’s death.
Ryan Hunnicutt, an attorney for both Dingman and Taylor, told The New York Times that Lakey’s death “saddens us all.”
“We are confident that the legal system will provide an opportunity for all the facts to be known and look forward to our day in court,” Hunnicutt said.
Spencer Bryan, a lawyer for Lakey’s parents, Doug and Cynthia Lakey, told the Times that the officers initially claimed that they only used the Tasers four times.
Given the body camera footage, Bryan said the charges against the officers are appropriate.
“I have never seen a more disturbing video,” Bryan said in an email. “After watching it, I cannot understand how the city allowed officers who exhibited such gross recklessness, resulting in a man’s death, to continue working. We have great confidence the evidence supports the charges.”
Lakey’s family has filed a public records lawsuit and a federal civil rights lawsuit following his death. Both of those lawsuits are pending.
The debate over the use of stun guns flooded headlines last month after the fatal police shooting of Rayshard Brooks, a Black man who was found asleep in a car in the drive-thru of an Atlanta Wendy’s.
After Brooks failed a sobriety test, the Georgia Bureau of Investigation (GBI) said officers attempted to arrest him. During the arrest, Brooks could be seen struggling with the officers and one took out his Taser.
“Witnesses report that during the struggle the male subject grabbed and was in possession of the Taser,” the GBI said in a release detailing the shooting. Brooks was fatally shot moments after he appeared to flee.
National