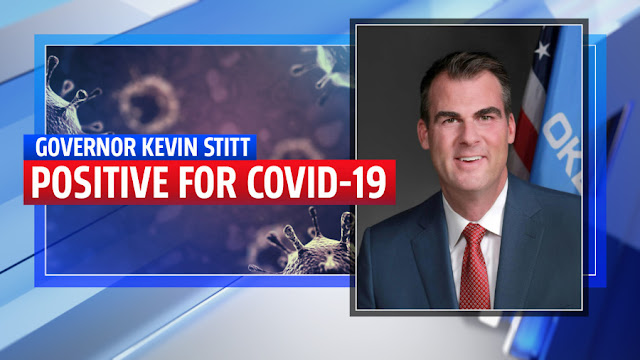 Oklahoma Gov. Kevin Stitt (R ) announced Wednesday that he has tested positive for COVID-19.
The governor made the announcement during a press conference, according to a local ABC affiliate is reporting. His test came out positive Tuesday afternoon.
Stitt, 48, said he believes he is the first governor in the nation to test positive for the virus. In March, one of his Cabinet members, David Ostrowe, tested positive.
The governor said he “feels fine” and that his wife and children have tested negative.
Stitt, who said he was working with contact tracers, led a Commissioners of the Land Office meeting Tuesday morning and did not have a mask over his face, according to Oklahoma Watch.
Stitt advocated for President Trump’s in-person campaign rally in Tulsa last month. He attended the rally himself and was seen in images of the event not wearing a face mask.
Oklahoma Health Commissioner Lance Frye said Wednesday that it's unclear where Stitt contracted the virus, but “it wasn’t so far back as the rally.”
Oklahoma is one of several states experiencing a surge in COVID-19 cases. On Tuesday, the state reported another daily high, with 993 new coronavirus cases. As of Wednesday, the state has confirmed nearly 22,000 cases and reported 428 deaths.
When asked at Wednesday's press conference if he regretted not wearing a mask often, Stitt said: "I don't really second-guess anything.”
He added that he is not considering a statewide mask mandate like the ones in Alabama and Texas.
"I'm just hesitant to mandate something that's problematic to enforce,” he said.
Local News National