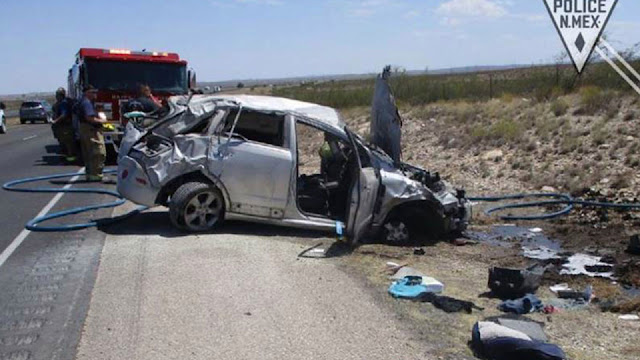 On July 10, 2020, at about 2:08 p.m. a fifty-five-year-old Alamogordo woman, was involved in a crash that left her unconscious in her burning car.  The incident started on U.S. Highway 285 near milepost 48 north of Carlsbad when the victim, who was traveling southbound, veered off the roadway for unknown reasons and struck a concrete barrier causing her 2008 Saturn to roll.
New Mexico State Police Officer Edgar Palomarez was on patrol in the area and came upon the crash.  The officer rushed to the victim’s aid finding her unconscious, not breathing and still wearing her seat belt.  The officer pulled her from the wreckage as the engine compartment ignited into flames.
Officer Palomarez began CPR on the victim, as a good Samaritan stopped to assist him in rendering aid.  When the victim began breathing on her own, the officer then extinguished the fire in the vehicle.
After extinguishing the fire, the officer applied tourniquets to the victim’s arms to control the bleeding from injuries sustained during the crash.  Carlsbad Fire Department arrived and transported the victim to Carlsbad where she was then flown to a Lubbock, TX hospital, her current condition is unknown.
Thanks to the quick thinking of Officer Edgar Palomarez, along with the help of the good Samaritan, the victim was pulled to safety and given the lifesaving care needed to get her to the hospital.  The cause of the crash is under investigation by the New Mexico State Police.
Local News