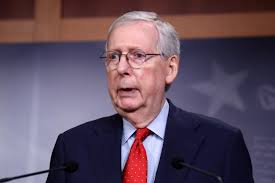 Senate Majority Leader Mitch McConnell (R-Ky.) on Tuesday provided a broad outline for what to expect in the forthcoming Republican coronavirus relief proposal, including help for schools, small businesses and testing.
McConnell, speaking from the Senate floor, indicated that he would soon be unveiling the Republican proposal after swapping ideas with the administration in recent weeks.
"The majority will be laying down another historic proposal very soon," McConnell said.
McConnell, as he did during the recent two-week July 4 break, outlined the major pillars of the forthcoming Republican bill as jobs, health care, kids in school and liability protections.
But he also provided new details including that Republicans would include $105 billion in help for schools, as well as provide more help for businesses, who have been hit hard as the spread of the coronavirus forced many to close or scale back.
"The American job market needs another shot of adrenaline. Senate Republicans are laser-focused on getting American workers their jobs back," McConnell said.
In addition to another round of Paycheck Protection Program loans, McConnell said the Republican proposal will reimburse businesses for expenses tied to protective equipment, testing and structural changes that need to be made to protect workers and customers. Many businesses, for example, have installed plexiglass or other barriers around checkout stations.
McConnell also indicated that the bill would include another round of stimulus checks. McConnell did not provide details on who would qualify but has previously talked about Americans who make up to $40,000 per year, in particular, needing additional assistance.
McConnell did not discuss one of Trump's top priorities, a payroll tax cut, in his speech. Treasury Secretary Steven Mnuchin told reporters on Monday night that the proposal was currently in the bill being negotiated among Republicans, but stopped short of saying it had to be in the final bill.
"We're going to be discussing it," McConnell said, asked about the omission as he walked back to his office. "As you know the secretary of the Treasury is coming up for lunch, and we’re all going to see if we can get on the same page.”
The payroll tax cut is one of several areas that currently divide Republicans and the White House. Some GOP senators have also appeared skeptical of the need for another round of stimulus checks, arguing that many Americans save the money instead of spending it and putting it back into the economy.
McConnell also indicated that the GOP proposal will include more funding for testing and vaccines, though he did not provide a dollar amount. Administration officials have been opposed to including more funding for testing, even as GOP senators say the country still needs to ramp up the number of tests performed per day.
“Our proposal will dedicate even more resources to the fastest race for a new vaccine in human history, along with diagnostics and treatments. Our bill will also protect seniors from a potential spike in premiums. And the federal government will continue to support hospitals, providers, and testing," McConnell added.
The GOP bill is also expected to provide a five-year shield from lawsuits tied to coronavirus infections unless an entity — including businesses, schools, hospitals or government agencies — engaged in gross negligence or intentional misconduct.
McConnell did not provide a top-line figure for the forthcoming Republican bill. He has privately told Republican senators that he wants to keep it around $1 trillion, a figure echoed on Monday by Mnuchin. That's substantially less than the nearly $3 trillion provided by a bill that passed the House in late May, largely along party lines.
McConnell acknowledged on Tuesday that he will need to negotiate with Democrats, but argued that “I do not believe there will be anything in our bill that our Democratic colleagues should not happily support."
Lawmakers and the White House have a matter of weeks to get an agreement on a fifth bill.
Both House Speaker Nancy Pelosi (D-Calif.) and Mnuchin have indicated they want an agreement by the end of next week, which is the end of the month.
The Senate isn't currently scheduled to leave until August 7, giving negotiators more flexibility to overcome several hurdles to getting an agreement.
Senate Minority Leader Charles Schumer (D-N.Y.) warned that the GOP bill "appears destined to fall drastically short of what's required" and didn't expect it to include hazard pay for workers, won't include more money for state and local governments and won't continue the $600 per week federal increase in unemployment benefits — which are all top Democratic priorities.
"Instead of working with Democrats in either the Senate or the House, Leader McConnell has decided to write the bill behind the closed doors of his office. The same partisan, one-side only process that has failed time and time again to produce successful legislation in the Senate," Schumer said.
National