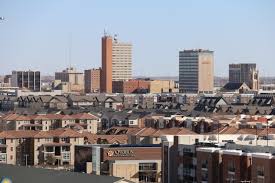 After eight years of growth averaging 4.3 percent a year, the pandemic battered Lubbock's economy, leading to a year-over-year contraction of 1.5 percent in May, according to the Lubbock Economic Index released Wednesday.
More than 17,000 people lost their jobs between March and April, a loss of more than 11 percent in Lubbock's existing positions. That led to a record unemployment rate of 10 percent.
Index authors note "[n]ever before has the Lubbock economy lost 11% of its jobs in one month, or even during an entire cycle of contraction" and state the unemployment rate has never been "anywhere near" 10% before. Even during the Great Recession of 2008-09, analysts indicate the Lubbock economy only lost about 3,400 jobs in a 14-month period.
Compared to 2019, May showed 7.5 percent job loss; analysts note it's "still horrific, but better" than April. Analysts report the economy recovered about 5,100 jobs that month.
In terms of the overall economy, February showed year-over-year growth at 4.5 percent, capping the 101-month streak dating back to 2012. In sheer index point values, March showed the first contraction, after the US declared the national COVID-19 emergency on March 13. With a peak at 160 points in February, March's economic index value slipped to 159.7
April and May showed the largest month-to-month changes in the economic index since its inception, at 3.6 and 3.2 points respectively. As of the end of May, Lubbock's economic index value is 152.9.
In economic growth values, March continued the year-over-year expansion at 4.1 percent, but April showed the growth slump to 1.1 percent over 2019. May marked the first year-over-year contraction at -1.5 percent compared to 2019.
"Incredibly," the report states, "new housing construction has continued to improve in 2020 with double-digit percentage year-over-year increases in all five months of the year thus far." The city issued 738 permits between January and May, the first time for that time period.
The airport showed a 50% drop in airline travel in March, a precursor to the staggering drop-off in April: in the whole month, only 2,345 people boarded a plane in Lubbock. The airport usually anticipates 40,000 passengers a month.
May showed a slight increase in travel, with 8,230 boardings. Analysts hope that's a sign of recovery.
Local News