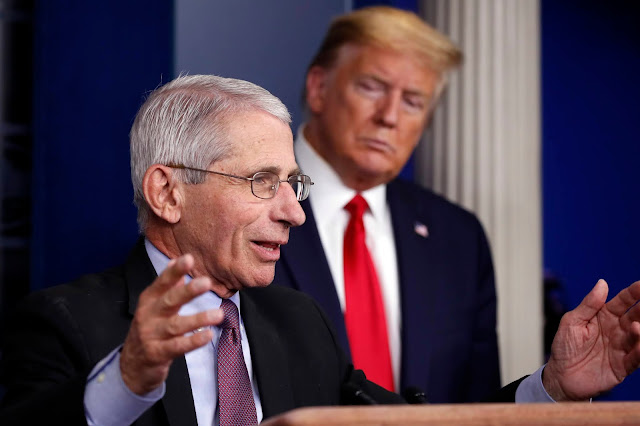 The White House is getting a lot of heat by pointing out that Dr. Anthony Fauci, the country’s top infectious-disease official, has a spottier record on predicting the course of pandemics than the media would have you believe. “White House officials now want to rein in Fauci by cherry-picking instances in which they can take Fauci out of context to use the uncertainties of the pandemic against him,” noted the Washington Post.
I understand that “cherry-picking” issues over the course of someone’s career can lead to a distorted picture. But one problem with coverage of Fauci is that the coverage has rarely offered any context beyond glowing profiles of the 79-year-old career civil servant and his behind-the-scenes clashes with Trump officials.
Dr. Fauci was challenged a bit on Sunday’s Meet the Press when the top U.S. coronavirus-testing official, Admiral Brett Giroir, said Fauci is “not 100 percent right” because his calls for now reinstituting lockdowns in some states come from “a very narrow public-health point of view.” Giroir argued that as an epidemiologist Fauci “admits that (he doesn’t) have the whole national interest in mind.”
It’s well-known in scientific circles that many specialists don’t look at the big picture. Dr. Malcolm Kendrick is a physician and author of Doctoring Data: How to Sort Out Medical Advice from Medical Nonsense. He recently told Spiked magazine that:
Epidemiologists would rather overestimate a threat by 100 times than underestimate it by 10 percent. These models will always hugely overestimate risk. Everyone has to say things will be really serious because they would look terrible if they said things would be all right and they were not. If they are proved wrong, they can say it was just as well to warn people because it could have been terrible even though it did not end up being so. This approach is taken without any cognizance of the damage that the advice they have given has caused.
That blind spot may explain Fauci’s recent comment that something resembling normal life in the U.S. won’t return for “a year or so.” “I would hope to get to some degree of real normality within a year or so. But I don’t think it’s this winter or fall,” Fauci told Britain’s Telegraph earlier this month.
I know Dr. Fauci’s calm approach and communications skills are viewed in very positive terms. But such dire predictions make it important to note his prediction record. Michael Fumento, a science writer who has reported on infectious diseases for 35 years, argues that Fauci has spent “his professional career warning of nightmare scenarios, many which never materialized.”
Fauci also supported the nationwide lockdown, which, Fumento argues, “resulted in less panic, caused no recessions, much less the possibility of a worldwide depression. Running their courses without months-long quarantines of the healthy, those pandemics didn’t trigger rises in alcohol and other drug abuse, domestic violence, depression and suicide.”
Fauci himself finally acknowledged to CNBC on May 22 that lockdowns could cause “irreparable damage” if imposed for too long. It’s clear that ship had already sailed by then. But we’ll see how Fauci does with his prediction that returning to something resembling normal life will take a year.
Opinion