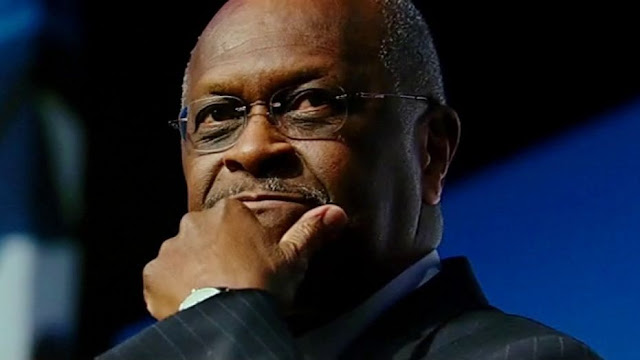 Herman Cain, a former Republican presidential candidate, died at age 74 from COVID-19 complications, a spokesperson confirmed on Thursday.
“Herman Cain — our boss, our friend, like a father to so many of us — has passed away,” Cain’s website editor Dan Calabrese said in a post.
"We knew when he was first hospitalized with COVID-19 that this was going to be a rough fight," Calabrese said. "He had trouble breathing and was taken to the hospital by ambulance. We all prayed that the initial meds they gave him would get his breathing back to normal, but it became clear pretty quickly that he was in for a battle."
Cain, the former CEO of Godfather's Pizza, was diagnosed with COVID-19 last month and admitted to an Atlanta-area hospital on July 1, 10 days after he attended President Trump’s rally in Tulsa, Okla. It is not known where Cain contracted the disease.
A spokesperson posted on Twitter earlier this week that the businessman and former GOP presidential candidate was undergoing oxygen treatment while still at the hospital.
Five days ago, doctors said Cain would eventually recover but it would be a slow process, Calabrese said, which prompted his team to post the Twitter update.
Cain, who served as co-chair of Black Voices for Trump, had been diagnosed with stage 4 colon cancer in 2006 but had survived the disease.
“Although he was basically pretty healthy in recent years, he was still in a high-risk group because of his history with cancer,” Calabrese said.
Cain, a former chairman of the Federal Reserve Bank in Kansas City, drew national attention when he ran for the 2012 Republican nomination with his 9-9-9 tax reform plan. The plan intended to replace current taxes with a 9 percent personal income tax, a 9 percent business transactions tax and a 9 percent federal sales tax.
The Republican candidate ended up dropping out of the race seven months later amid sexual harassment allegations, which he and his wife have denied.
Last year, Trump mulled picking Cain as a nominee for the Federal Reserve Board, but Cain withdrew his name after several Republican senators voiced opposition to the idea.
Cain had also been set to launch a weekly show at Newsmax TV that was announced in April.
White House press secretary Kayleigh McEnany tweeted that Cain "embodied the American Dream and represented the very best of American spirit."
Cain had posted a photo of himself and others at the June Trump rally in Tulsa, none of whom appeared to be wearing face coverings. After his diagnosis, the Trump campaign said the president had not personally met with Cain at the rally.
Before the rally, six members of the campaign who helped set it up tested positive for COVID-19 and were subsequently quarantined and unable to attend. Afterwards, multiple campaign staffers and dozens of Secret Service agents self-quarantined after possible exposure to infected individuals.
Cain had also voiced support for the lack of a mask mandate at Trump's July 4 event at Mount Rushmore.
"Masks will not be mandatory for the event, which will be attended by President Trump. PEOPLE ARE FED UP!" he tweeted at the time.
Cain is the most prominent American politician to succumb to the coronavirus, which has also infected at least nine members of Congress and one governor, though most of those have not shown severe symptoms.
On Wednesday, Rep. Louie Gohmert (R-Texas) became the latest lawmaker to confirm he has COVID-19, prompting Speaker Nancy Pelosi (D-Calif.) to mandate the wearing of masks on the House floor.
National