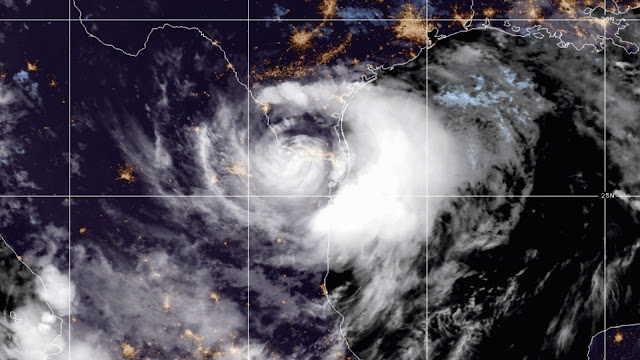 Hanna, the first hurricane of the Atlantic season, is walloping southeast Texas and northeast Mexico with heavy rains and dangerous flash flooding, according to the National Hurricane Center.
Hurricane Hanna made landfall at 6 p.m. ET on Saturday (July 25) in Texas on Padre Island, just south of Corpus Christi, with maximum sustained winds of 90 mph (145 km/h), just 6 mph shy of being a Category 2 hurricane.
Just over an hour later, the storm made landfall again at 7:15 p.m. near Port Mansfield, in Kennedy County, Texas, still packing 90 mph maximum sustained winds, USA Today reported.
After reaching land, the storm weakened and is now considered a tropical storm — maximum sustained winds dropped to 50 mph (85 km/h), the National Hurricane Center reported at 7 a.m. today (July 26). At that time, the storm was about 55 miles (85 km) west of McAllen, Texas, and about 110 miles (175 km) east-northeast of Monterrey, Mexico.
Hanna is moving toward the west-southwest at about 9 mph (15 km/h), a motion that's expected to continue through Monday (July 27). The NHC says the center of Hanna is forecast to continue to move farther inland over northeastern Mexico through tonight. As Hanna moves farther inland, the storm will continue to weaken to a tropical depression later today, before dissipating Monday or Monday night, the NHC said.
This morning, tropical-storm-force winds extended outward up to 115 miles (185 km), mostly over water to the east of Hanna's center.
The National Hurricane Center reported "significant structural damage" in Port Mansfield, where wind gusts reached over 80 mph (129 km/h) on Saturday afternoon, and "severe damage" to a pier on North Padre Island where winds surpassed 100 mph (160 km/h), The Washington Post reported.
Texas is already struggling due to a surge in coronavirus cases: Just yesterday, the state logged 7,735 new cases and 137 related deaths, bringing the state's totals to 393,683 cases and 5,069 COVID-19 deaths.
Yesterday at a news conference, Texas Gov. Greg Abbott reminded residents of the combined threat posed by COVID-19 and the natural disaster.
"Any hurricane is an enormous challenge," Abbott said, as reported by the Texas Tribune. "This challenge is complicated and made even more severe seeing that it is sweeping through an area that is the most challenged area in the state for COVID-19."
Texas