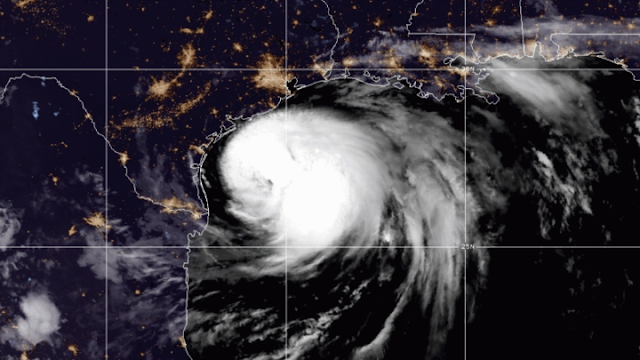 Tropical Storm Hanna was upgraded to a hurricane on Saturday morning, becoming the first hurricane of the 2020 Atlantic season as it barrels toward Texas.
The National Hurricane Center (NHC) said Hanna had strengthened and gained winds of more than 75 miles per hour, making it a Category 1 storm. It is expected to strengthen as it continues moving closer to the Texas coast.
As of Saturday morning, Hanna was located roughly 100 miles away from Corpus Christi, Texas, and was moving west at 9 mph. It is expected to make landfall later Saturday, and a hurricane warning is in effect for parts of Texas.
Some areas of Texas are anticipated to get six to 12 inches of rain, while others will get 18 inches through Sunday night.
Kleberg County, south of Corpus Christi, has already issued a voluntary evacuation order.
The storm comes as Texas is already grappling with an alarming surge in COVID-19 cases, with the governor issuing a statewide mask order and rolling back the state's reopening plan.
While Hanna is the first hurricane of the Atlantic season, Hurricane Douglas is also nearing Hawaii in the Pacific Ocean. The storm peaked at Category 4 Friday, though it is expected to weaken before actually making landfall this weekend.
“Douglas is expected to move near or over portions of the Hawaiian Islands this weekend, and there is an increasing chance that strong winds and heavy rainfall could affect portions of the state beginning on Sunday,” the NHC said in an update earlier this week.
Texas