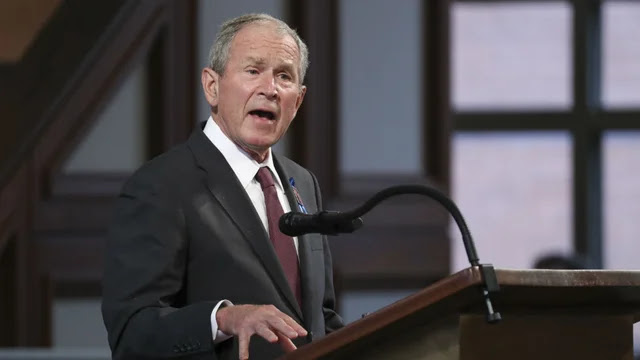 Former President George W. Bush hailed the late Rep. John Lewis (D-Ga.) at his funeral Thursday, comparing the civil rights icon to the biblical prophet Isaiah.
Bush, speaking at Atlanta’s Ebenezer Baptist Church, noted Lewis’ childhood in rural Troy, Ala., where Lewis has described preaching to his family’s chickens as a child.
When Lewis refused to eat one of the chickens, Bush added, “going hungry was his first act of nonviolent protest.”
“From Troy to the sit-ins of Nashville, to the Freedom Rides to the March on Washington, from Freedom Summer to Selma, John Lewis always looked outward, not inward,” Bush added. “He always believed in preaching the gospel in word and in deed, insisting that hate and fear had to be answered with love and hope.”
Lewis, Bush said, “believed in the lord, he believed in humanity and he believed in America.”
Bush referenced the Biblical passage in which, seeking prophet, God asks “Whom shall I send?” with Isaiah responding “Here am I, send me.”
“John Lewis heard that call a long time ago in segregated Alabama, and he took up the work of the lord through all his days,” Bush said. “His lesson to all of us is that we must all keep ourselves open to hearing the call of love, the call of service and the call to sacrifice for others.”
Lewis died earlier this month at the age of 80. He was a legendary figure on Capitol Hill, where he had served Georgia for three decades. He had profound impact on civil rights in America, participating in sit-ins, being the youngest speaker at the 1963 March of Washington and leading the march across the Edmund Pettus Bridge in Selma, Ala., on what would become known as "Bloody Sunday."
The former president acknowledged some political disagreements with Lewis, but said both men were capable of “hav[ing] differing views on how to protect our union while sharing the conviction that our nation, however flawed, is at heart a good and noble one.”
“We live in a better and nobler country today because of John Lewis and his abiding faith in the power of God, the power of democracy and in the power of love to lift us all to a higher ground,” the former president said. “The story that began in true isn’t ending today, nor is the work.”
National