Fort Pat Tillman has a nice ring to it 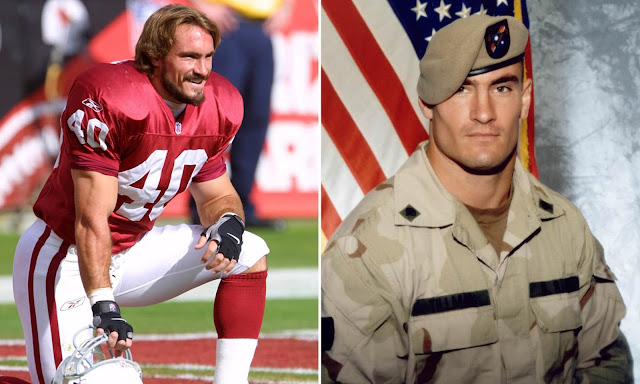 The folks who want to rename landmarks currently named after Confederate generals and leaders are going about it all wrong — that is, if they really want to convince people to rename those landmarks.
Most human beings, and particularly most Americans, are instinctively resistant to any message in the vein of, “That thing you’ve been doing all your life and never saw as harmful to anyone is morally abhorrent and must stop immediately.” Few human beings can easily turn on a dime, and not many of us find changing longtime habits to be easy — otherwise, quitting smoking, drinking, or overeating would be a snap.
If you want people to change, you have to make them want to change. Advocates of cancel culture have only a few moves — mostly demonization and intimidation — and seem to relish turning everything into a contest of wills and basking in their moral superiority over those who disagree. I doubt it ever crossed their minds to try to make those who initially disagree want to rename existing military bases, public squares, and other landmarks.
Take, for example, Fort Benning straddling the Alabama–Georgia border. Few Americans knew it was named after Henry Benning until recently and I doubt many Americans feel any particular reverence towards Henry Benning. When you read Benning’s speech to the Virginia convention on secession, you will probably recoil:
If things are allowed to go on as they are, it is certain that slavery is to be abolished except in Georgia and the other cotton States, and I doubt, ultimately in these States also. By the time the North shall have attained the power, the black race will be in a large majority, and then we will have black governors, black legislatures, black juries, black everything. [Laughter.] The majority according to the Northern idea, which will then be the all-pervading, all powerful one, have the right to control. It will be in keeping particularly with the principles of the abolitionists that the majority, no matter of what, shall rule. Is it to be supposed that the white race will stand that?
Suppose they elevated Frederick Douglas, your escaped slave, to the Presidency? And there are hundreds of thousands at the North who would do this for the purpose of humiliating and insulting the South. What would be your position in such an event? I say give me pestilence and famine sooner than that.
If we were building a new military base today, would we ever name it after a guy like that? Hell, no.
But almost everyone is used to calling it Fort Benning, and many people will instinctively reject demands from a 20-something left-wing activist insisting it be renamed as a rebuke to structural white supremacy or any argument like that.
Don’t argue, “We should take away the name Fort Benning.”
Argue: “We should rename Fort Benning after Pat Tillman, who walked away from a lucrative NFL career to enlist in the U.S. Army, trained at that base, and who was killed in Afghanistan.” Or any other fallen American hero who many would agree deserves a major recognition like that.*
Then the debate shifts away from what people think about Henry Benning or the Confederacy or the South and shifts towards who in American history — including recent American history — deserves recognition and lasting honor and hasn’t received it yet.
There is no shortage of underrecognized exceptional and heroic Americans. We have 26 post-Vietnam Medal of Honor recipients alone, eleven awarded posthumously. Or we can look further back — America was built in large part by valiant and courageous contributions to our battles, often by those who didn’t look like the best-known Founding Fathers. Don’t erase parts of the portrait of America, widen the portrait — and call attention to names Americans ought to recognize but rarely do: Robert Smalls. Mary Ellen Pleasant. Grace Hopper. Jesse L. Brown. William H. Hastie. Hector P. Garcia. Carmen Conteras Bozak. Marcelino Serna. Angel Mendez. Luis Walter Alvarez. Kurt Chew-Een Lee. Joe Hayashi. Virginia Hall. Ely S. Parker. Ernest Evans. Jack C. Montgomery. I’m sure you can think of and find many more.
But for an effort like this, those who are offended by the Confederate names have to want to build a consensus in support of a better alternative — and it’s not clear that this is really their objective. I suspect that for some, the contest of wills is the point.
From 2006 to 2012, the U.S. Army Forward Operating Base near Lawara, Afghanistan, was named “Forward Operating Base Tillman” in his honor. Since that FOB closed, the U.S. military has not had a facility named after him.
Opinion