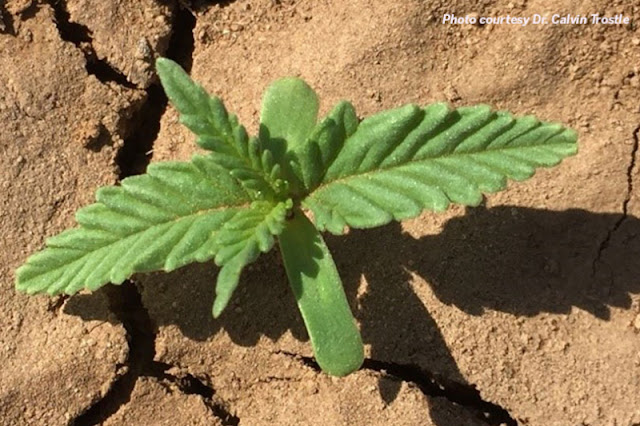 By Jennifer Dorsett
Texas farmers are about midway through the growing season for the state’s first industrial hemp crop in nearly 100 years.
And it’s been quite the learning experience, according to Texas A&M AgriLife Extension Service Statewide Hemp Specialist Calvin Trostle.
Issues have arisen with germination and emergence to disease and premature reproductive development, although Trostle noted there have been successes, as well.
At AgriLife hemp variety trial test plots in San Angelo and Lubbock, Trostle said researchers had trouble with seed germination and emergence despite frequent irrigation.
“Next year’s trials can expect to be planted in cooler conditions, potentially April to early May to minimize excessive heat, which has been a problem this year,” Trostle wrote in the Texas Row Crops Newsletter.
Seeded cannabinoid test plots in those areas had germination and establishment rates of 5-25 percent of planted seed. Trostle said they overplanted to make allowances for heat, seeding depth, possible soil crusts and lack of vigor, as well as to ensure enough plants remain to continue trials.
“We have observed some seedlings dying after setting their first true leaves,” he said. “Our first suspect is intense heat and sunlight.”
Lubbock-area growers experienced the same challenges, with one farmer losing more than half of his seedlings. Trostle said this bolsters the need for planting date work in 2021 to document establishment rates when conditions are less stressful.
Fiber hemp variety trials at Lubbock and San Angelo fared similarly. Trostle said the plots at San Angelo were replanted the first week of July, while in Lubbock the team overseeded fields at the end of June to improve a poor initial stand. In Lubbock, the field is being watered twice a day, which Trostle said will continue until the heat abates.
In Matagorda County, there were reports of premature reproductive development among three grain varieties: X-59, Henola and Yuma.
“The farmer reported within four weeks of planting, all three varieties were showing distinct floral structure development,” Trostle said. “This was unexpected due to the later time of year in planting. Industry experts familiar with this situation say nothing can be done to reverse the reproductive growth, hence the productivity of the varieties is poor.”
Trostle said all three varieties have been planted without issue in Colorado, but Matagorda County is further south than other U.S. hemp crops and that may impact growing conditions.
AgriLife researchers have now observed the same conditions with at least two fiber varieties at trials in Lubbock, as well as one in San Angelo.
“In the Lubbock case, one variety is from Poland so is adapted to far northerly latitudes. It showed floral structure develop in as little as 17 days after planting or about 11 days after emergence,” he said. “The second variety is a Canadian fiber variety. Several other fiber varieties are expressing the same characteristics in a farmer’s fiber variety trial in Terry County.”
One cannabinoid variety growing in Lubbock appears to be expressing early reproductive growth, as well. Trostle said beginning the week of July 13, the cannabinoid crops at San Angelo and Lubbock will receive weekly ratings on this development.
“I will grant, this being my first year of watching hemp grow, that I do not have a good first-hand reference for what should be normal,” Trostle said. “But nevertheless, our field observations are raising questions, and knowing of more southerly and hot conditions in Texas, it is important we understand what is occurring in our early hemp crops.”
A Gaines County farmer purchased feminized seed and experienced good germination and early growth. But after two weeks seedlings started dying at a high rate, and after five weeks, less than 2 percent of the seedlings were still alive. Trostle said it might be due to plant pathogen disease, but AgriLife researchers don’t know at this point.
“This is another example of first-year ‘what happened?’” Trostle said. “AgriLife is not yet able to examine the hemp tissue in a research setting to determine the cause of death, if it is indeed a plant pathogen. We have collected seed, potting soil and flats and will see if we can reproduce the conditions.”
But it’s not all bad news. Trostle said it seemed like those who planted earlier in the year have better crops than those who waited until June or later to begin planting, and he had heard from a number of small-acre farmers whose crops “seemed to be doing okay.”
In addition to on-farm experience, an AgriLife webinar in mid-June shed some light on hemp farmers across the state.
More than 800 producer licenses have been issued so far this year, along with 351 crop permits, according to Texas Department of Agriculture (TDA) Assistant Commissioner Dan Hunter.
There are now four TDA-approved labs for official THC analysis, two of which are located in Texas, and 27 processors have been licensed.
There are 73 handler/sampler licensees in the state and 158 handlers also approved by TDA to assist farmers in hemp sampling requirements.
Hunter noted transport manifests are important when moving hemp, stressing handlers must be licensed to move the product, even if it’s a small sample. Both farmers and handlers must have arranged for a transport manifest.
Samples collected by a sampler for official THC analysis must have a transport manifest, Hunter said. If the full crop is being transported, a copy of the lab analysis THC results must accompany the crop.
Transport is only allowed for samples that contain no more than 0.3 percent THC, within the lab’s error of analysis.
Trostle recommended farmers regularly review hemp licensing rules at TDA’s hemp webpage to ensure they are up-to-date on regulations and rules.
He also encouraged hemp farmers to reach out to AgriLife with any observations on germination and establishment rates, early reproductive development and potential insect or disease damages.
Farm and Ranch