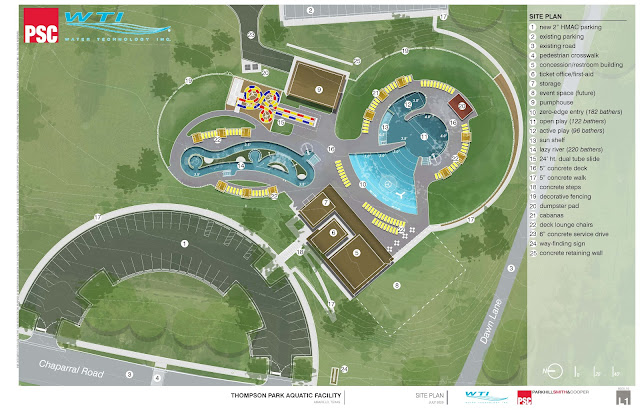 The City of Amarillo is replacing arguably the oldest public swimming pool in the Amarillo area with a state-of-the-art facility that will be the largest public aquatics site in the Amarillo area.
The City of Amarillo (COA) closed Thompson Park Pool in December 2018 due to public safety concerns. The pool, which opened in 1931, was one of the oldest (if not the oldest) public swimming pools in the Amarillo area.
During its nearly 90 years of use, Thompson Park Pool underwent three renovation projects. The nearly 100 year-old pool was closed due to structural issues.
After months of research, Amarillo City Council approved $7.9 million in certificates of obligation in May to fund a new Thompson Park Pool.
The new Thompson Park Pool is tentatively scheduled to open around Memorial Day of 2021. The facility will include a lazy river (with a capacity of 220 people), cabanas and a main pool area large enough for 400 people.
“The new Thompson Park Pool will be a modern, state-of-the-art facility,” said COA Parks and Recreation Department Director Michael Kashuba. “We really wanted and valued public input on this project – this was a major consideration. This will be a facility that the entire Amarillo area can be proud of and will want to share with their family and friends for decades to come.”
Local News