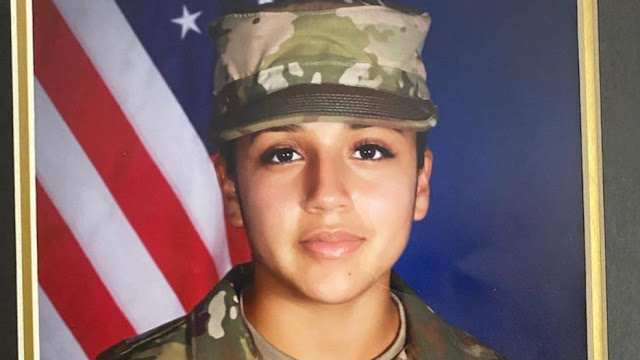 On Saturday, as Americans were celebrating Independence Day, there were marches, rallies, and vigils across Texas in support of soldier Vanessa Guillen. Specialist Guillen, 20, went missing from the Ft. Hood Army Base in April, and human remains that the Army has confirmed to be hers were found last week. Guillen had been bludgeoned to death, and her remains were mutilated and buried near the base. When pursued by authorities, one suspect in the case, a fellow soldier, killed himself, while his alleged accomplice — his girlfriend — was arrested.
Guillen’s death raises questions about how her investigation was handled, and about the Army’s ability to take care of its service members. The tragic irony here is that a young Latina joined the military to serve and protect her country, and yet her country failed to protect her.
While there is much that the public still does not know about Guillen’s case, the circumstances surrounding her disappearance raise red flags. According to her family, Guillen had said that she was being sexually harassed at work — but she had not reported it, which suggests that she may not have trusted those in her chain of command. This inference is no stretch of the imagination, as sexual harassment, assault and rape in the U.S. military are as prevalent as ever, despite prevention efforts. A report by the Defense Department last year found that sexual assaults in the military had surged, driven by a 50 percent increase in assaults on women in uniform.
In a June 27 statement about Guillen’s case, an Army spokesman wrote that “We... have no credible information or reports that Vanessa was sexually assaulted” and that the Army was not aware of any report of sexual harassment. The spokesman did not elaborate on what the Army considered “credible” — a vague term often used to dismiss reports of harassment and assault by female service members. And consider that it was over two months after Guillen’s disappearance that the Army opened a separate inquiry into the allegations of harassment.
Army officials have said that hundreds of soldiers participated in searches for Guillen in and around Ft. Hood, and that an aircraft from the 1st Cavalry Division flew more than 100 hours looking for her. While such efforts were important and valuable, they must be kept in perspective. Military officials can literally shut down an entire base if weapons or equipment are discovered missing. Doesn’t a missing service member deserve at least the same? In Guillen’s case, the answer seems to be no.
From the time that Guillen vanished — leaving behind her car keys, military identification card, and wallet — her family expressed frustration with what they viewed as a lack of communication from Army officials. Her family created a website to draw attention to the case, and her mother’s plea for the military to find her daughter went viral. As celebrities like Salma Hayek raised awareness of the case, hashtags like “Justice for Vanessa Guillen” and “I Am Vanessa Guillen” trended on Twitter and Instagram.
It should not have taken social media campaigns and viral videos to prompt a sense of urgency in the Army investigation. The disappearance of a soldier from a secure military installation should merit the highest level of concern, even in the absence of outside pressure.
True, there is no conclusive evidence that Ft. Hood officials were derelict in the handling of Guillen’s case. Nonetheless, the case merits a congressional investigation as well as full accountability from Army leadership.
The public needs to know whether proper procedures were followed after Guillen’s disappearance, and what protocols need to be put in place to protect other solders; otherwise, the Army risks a perception in the that they didn’t care enough about Guillen.
All Americans should care about what happened to Vanessa Guillen. Her death and its investigation were both a tragedy and an outrage – and she still deserves justice.
Opinion