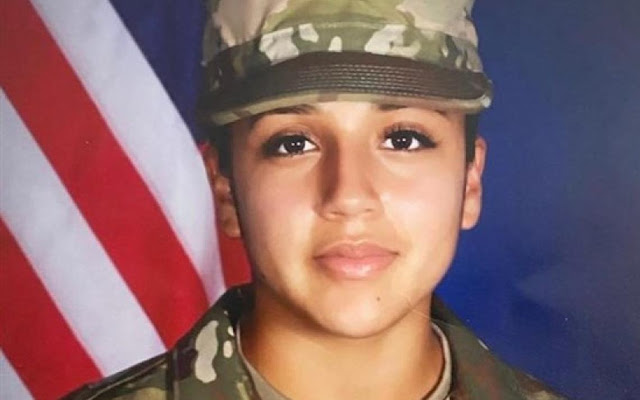 Army Secretary Ryan McCarthy on Friday said he has directed an independent review of the command climate at Texas’s Fort Hood following the months-long disappearance and slaying of Army Spec. Vanessa Guillén at the base.
Guillén, who went missing April 22 and whose remains were found and positively identified by the Army in late June, had told family members that she had been sexually harassed.
The main suspect in Guillén’s murder, Spc. Aaron Robinson, fled Fort Hood and committed suicide on June 30 before police could arrest him.
Lawmakers and advocacy groups have criticized the Army over its handling of the incident, raising questions about the military’s treatment of women and Hispanic service members.
If the investigation finds actions should have been handled differently “then we will take the appropriate accountability at any echelon,” McCarthy told reporters on a conference call.
“We have to ensure that Hispanic service members are able to serve without hurdles of discrimination, they have the opportunity to progress through the ranks at every level and are able to do so without the fear from criminal acts such as sexual assault and harassment. Our soldiers and their families deserve to work and live in a safe and healthy environment,” he said.
McCarthy said Army Undersecretary James McPherson will oversee the review, and that he is in the midst of assembling the panel that will include attorneys as well as a representative from the League of United Latin American Citizen.
“The purpose of this independent review is to determine whether the command climate and culture at Fort Hood and the military communities surrounding Fort Hood reflect Army values, including respect, inclusiveness, workplaces free from sexual harassment and a commitment to diversity,” McPherson said.
The panel to be assembled by next week will gather and review historical data on Fort Hood, and will also travel to the installation to conduct interviews with leadership, soldiers and civic community leaders.
Guillén's disappearance and death has gained nationwide attention with lawmakers joining her family in criticizing the military’s handling of the case and calls for a federal investigation.
Army investigators told reporters earlier on Friday that within five days of Guillén's disappearance, they zeroed in on Robinson as a suspect as he was one of the last people to have seen her alive.
There was no evidence, however, that the two had developed a social or personal relationship or had any conflict with each other, an Army official said.
Guillén never filed a formal complaint, according to evidence, but faced “potentially some harassment,” though it was “not of a sexual nature” and did not come from people of interest in the investigation, they said.
Texas