Analysis: Texas Gov. Greg Abbott is lucky not to be on the 2020 ballot 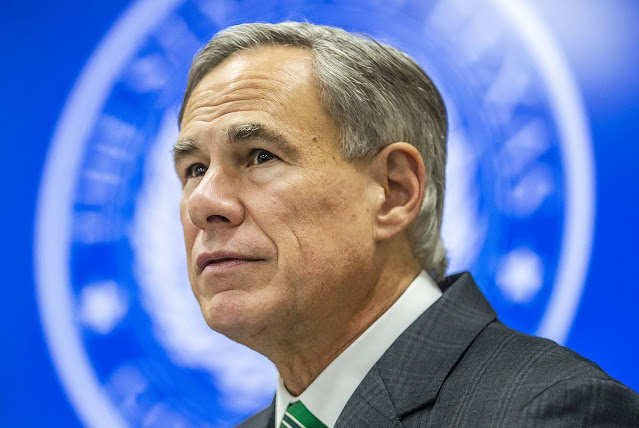 By Ross Ramsey
Greg Abbott has had a rough month. The civil liberties wing of the governor’s Republican Party, with its focus on individual freedom and economics, is lobbing rotten tomatoes his way — increasingly agitated by his attempts to cage the coronavirus with a new series of behavioral restrictions.
Abbott is simultaneously building the case for higher office for some of the state Democratic Party’s future stars — people in the local offices he relied on in the first stages of the pandemic, then cut off from power and now is trying to blame for the failures of his own response to the coronavirus.
If doing a good job is the best politics, Abbott should be making it harder for Texans to see his opponents in either party as future leaders — and certainly not as potential challengers.
Instead, he’s making it easier. Some conservatives seem to see him as the most prominent victim in a movie about political body snatchers, saying he’s been captured by the nanny-staters on the left. And on the left, he’s the governor who opened the state for the coronavirus by buckling to pressure from noisy activists who bridled at social distancing directives.
After a month of restrictions, Texas entered May with the spread of the coronavirus slowed, and Abbott, turning his attention to the lagging economy, quickly relaxed those social distancing rules. Now the state is experiencing rapid growth in caseloads and hospitalizations, and the governor is suffering politically for the decisions he’s made along the way.
Tough stuff, especially for the guy who outperformed all of his fellow statewide Republicans in the 2018 elections and who, at least by the election numbers and his title, should be the GOP’s standard-bearer in Texas.
If Abbott were on the ballot this year, he’d face real competition — even in a Republican Party primary. Former state Sen. Don Huffines of Dallas has been on the speaking circuit since before the pandemic, telling crowds about what he sees as a fake conservative government dominated by Republicans in Austin.
The new conservative phenom, Shelley Luther of Pilot Point, is still on the hustings months after her protest of Abbott’s business shutdowns, her jailing and the opening of her Dallas salon — the reasons that we know her name. She recently said at an Austin rally that she’s thinking about a run for office.
And there’s always Patrick, the lieutenant governor whose strength with small government and social conservatives has always worked as a restraint against Abbott siding with the party’s moderates.
All that is to say nothing of the Democrats, who, amid a generational change in top talent, have built a bench of candidates in local government, a crew that includes officeholders like Harris County Judge Lina Hidalgo and Dallas County Judge Clay Jenkins, both of whom insisted the governor was too quick to relax his efforts to control the spread of the coronavirus, and both of whom have been at odds with him about pushing for tougher measures to slow it now.
A taste of that fight, from Hidalgo on ABC News’ “This Week”: “As long as we’re doing as little as possible and hoping for the best, we’re always going to be chasing this thing, we’re always going to be behind, and the virus will always outrun us. And so, what we need right now is to do what works, which is a stay-home order.”
Those battles and those faces — each known in a big metro area and each fresh to the rest of the state — are the makings of a potential Democratic primary in 2022.
And they’re not alone in the party that’s been shut out: Throw Dallas Mayor Eric Johnson and San Antonio Mayor Ron Nirenberg into the mix, along with others who have already moved on from local government, like U.S. Rep. Veronica Escobar of El Paso, a former county commissioner, and her predecessor in Congress, former El Paso City Council member Beto O’Rourke. And don’t leave out the San Antonio twins, Julián and Joaquin Castro, one a former mayor, Cabinet secretary and presidential candidate, the other a sitting member of Congress.
That’s before you even start pulling scouting reports on other potential candidates in the Texas Legislature, in other county and city government spots, and outsiders who might turn their success outside of elected office into success in politics — like President Donald Trump or U.S. Sen. Ted Cruz.
It’s a deep bench. That doesn’t mean the Democrats will do anything with it; they’ve had deep benches before and remained out of power.
It’s too early to handicap 2022; we don’t know what’s going to happen in the elections four months from now. But it’s not too early to scan the field, to see whether the issues are bending to the advantage of incumbents or potential challengers.
Change comes fast, too: At the beginning of this year, Abbott looked strong, with a great economy, a sound state budget and only the early rumblings of a worldwide pandemic.
And now? That early stability has evaporated, and the politics have become more treacherous.
This article originally appeared at the Texas Tribune.
Opinion