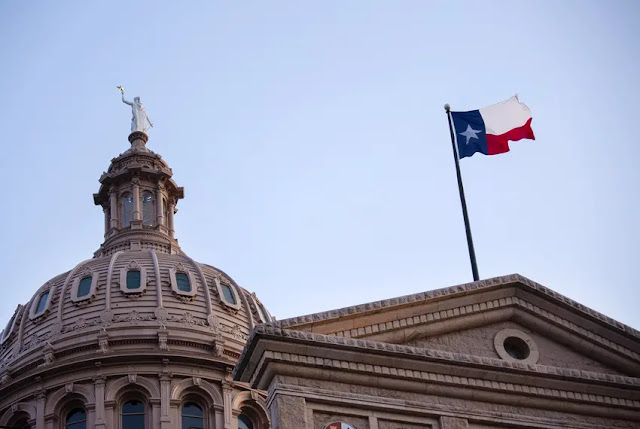 By Ross Ramsey
The cuts come next.
The latest news from the Texas comptroller — that the state will have $11.6 billion less to spend in its current budget than lawmakers expected — leads straight to a conversation about which programs and services in the state budget are expendable.
That conversation is already underway. The timing is tricky. A lot of the lawmakers who’ll make those budget decisions are campaigning for reelection in November. The Legislature will be in session in January — just six months from now — to revise the current budget and write the next one.
And the budgeteers are working without all of the information they’d like to have.
Despite their efforts, the state’s forecasting flashlights don’t shine very far into the darkness. Comptroller Glenn Hegar, revenue estimator Tom Currah and their crew have the sales, franchise, oil and gas, and other tax results from the last quarter to guide them, but everything else is guesswork. When will the state’s businesses be fully open and operating? When will the oil and gas industry rebound? How is anyone supposed to know when the pandemic will be effectively controlled? When will schools open, and does that mean parents can return to work?
The Texas economy is never easy to predict. It’s worse now.
Need to keep tabs on the latest coronavirus news in Texas? Our evening roundup has you covered.
Hegar built that into his latest projections. “It’s important to note that this revised estimate carries unprecedented uncertainty,” he said in the cover letter to state leaders.
That’s a comptroller’s way of saying, “Hey, there are so many things we don’t know, and these numbers might be crazy. Good luck out there!”
Lawmakers knew they were going to be in a financial bind as soon as businesses started closing in the spring. Before most economists were willing to do so, Hegar said the state’s economy was in a recession. He told lawmakers to expect a midsummer revision to the fiscal forecast with billions cut from his earlier projection. State leaders asked agencies to detail 5% proposed cuts in spending.
The comptroller’s new numbers include new estimates of how much money will be available in a state savings account known as the rainy day fund. It’s lower than before, at $8.8 billion, but that’s enough to cover his newly projected shortfall ($4.6 billion) if lawmakers want to hit that account instead of making cuts. They’ll have to find a way to cover large expected deficits in their Medicaid budget, but they might also be getting more relief/response money from the federal government.
The current budget isn’t really the problem.
What comes after the current budget is the hard part. In January, lawmakers will write the 2022-23 budget. They’ll have a little more information about the pandemic, a little more information about the state of the economy, and a great deal of uncertainty about how much money will roll into the state treasury, and when.
Republicans in control of state government for most of the last two decades have written the last nine state budgets. The programs that might be on the block this time have their support. And it’s safe to say the Democrats dreaming of winning a majority in the Texas House aren’t eager to cut services, either.
But if the past is the guide, legislators are likely to cut spending. The last big dip in state finance came after the global financial crisis in 2008. Texas legislators put together a two-year budget in 2009 that had considerable support from federal stimulus funds. But the economic troubles lingered after the stimulus, and a projected shortfall of $27 billion in 2011 led to deep budget cuts — notably including cuts to public education that affected Texas schools for years.
If big cuts are in order, education and health and human services are the biggest spending categories in the Texas budget.
Most other spending targets, however attractive, aren’t big enough to cover a hole of the size Hegar has described. And the two big ones are hard to hit.
The legislative session in 2019 might seem like ancient history, but that session was marked by a new state commitment to public school finance. Lawmakers said they would increase the state’s share of the cost of schools. They increased overall spending. And they did all of that in response to the 2018 elections, when voters focused on support for public education showed enough strength to win the attention of the Republicans in control of state government.
It would be politically risky to cut public education in the session after that, especially with the state’s top elected officials on their way to a 2022 election cycle. So is cutting funding in health and human services agencies — especially the ones at the front of responses to the pandemic and the recession.
But it could happen. They’ll have to cut somewhere.
This article originally appeared at the Texas Tribune.
Opinion