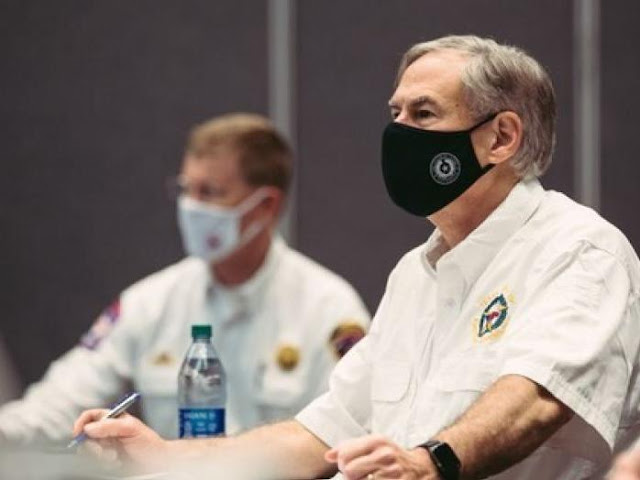 With voice raised, Gov. Greg Abbott strongly defended his refusal to impose another statewide shutdown to help slow the spread of COVID-19. The strong words from an uncharacteristically animated Abbott came at a post-Hurricane Hanna news conference Tuesday in Corpus Christi.
Abbott argued there is no need for a shutdown if local authorities would enforce his mask and occupancy orders. No one, except Dallas County, has taken enforcement action, he said.
“The need is not for more power to shut down jobs and to force people into poverty. The need is for governments to enforce the executive orders already in place,” said Abbott.
The governor claimed it is his actions that are driving the flattening of the COVID-19 curve in the state’s major metropolitan areas.
“Over the past month, there was call after call after call from all of the large counties — governor, let us lock down our counties again,” said Abbott. “And what we have seen over that time period through the mask requirement that I imposed, through the closure of bars in all of these large counties, we have seen a reduction in the number of people testing positive. We have seen a reduction in the number of hospitalizations.”
Dallas County Judge Clay Jenkins moved over the weekend to shut down strip clubs and cigar bars for not adhering to the statewide mask order. Other counties with Democratic leadership, have not responded in similar form. In fairness, they have complained about retaliatory action or a lack of support for past efforts at enforcement.
Abbott’s raised-voice responses to media questions came at a live news conference he called to provide an update on hurricane recovery efforts in South Texas. Such news conferences have become rare in the last two months as the governor faced increased scrutiny from both sides of the political aisle and sagging public approval numbers for his COVID-19 response.
Abbott is also carrying the bulk of the burden for representing on behalf of the Republican Party and delivering Texas to the president’s re-election campaign in November. A growing number of polls have President Donald Trump behind or neck-and-neck with presumptive Democratic nominee Joe Biden in Texas.
Although still much higher than in May before the statewide lockdown was lifted, the data do point to a leveling of cases and hospitalizations since the mask order was put in place. Still, the death toll is rising, with a Texan dying from COVID-19 about every six minutes, USA Today reports.
As for the hurricane recovery effort, Abbott urged South Texas residents to continue to adhere to COVID-19 safety precautions.
Although the storm caused a considerable amount of damage, there were no lives lost. As of Tuesday, there were no residents in shelters and the process of restoring power to the area was almost finished.
More than 30 counties have been declared federal disaster areas, and the Federal Emergency Management Agency has authorized limited financial assistance in the form of reimbursement for mass care, including evacuation and shelter support at 75 percent federal funding.
Texas