A few thoughts on reopening schools 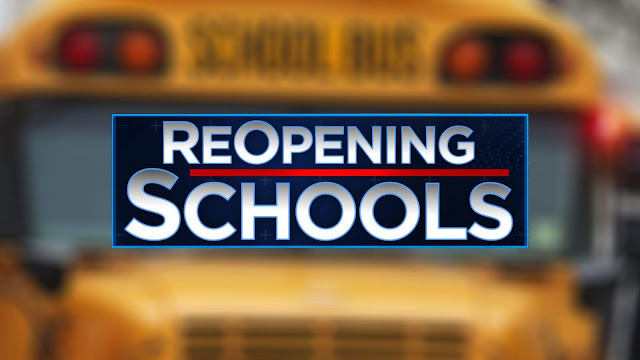 Right now, across the country, school boards and school administrators are trying to figure out what plan would serve the kids best and be the safest . . . while being unable to predict what the local conditions for the pandemic will be in September and beyond.
The right course of action might look really different if your community looks like Weston County, Wyo. — which has had one case so far in this pandemic — or if it looks like Orange County, Calif. — which had more than 1,500 new cases yesterday, bringing their total so far to more than 21,000. A plan to continue distance learning and keep all the kids at home will look excessively cautious if cases are low or rare; a plan to bring in the kids in any capacity might look excessively risky if the surrounding community is having an outbreak.
In my neck of the woods, parents are being asked to choose between two options: in-person school or virtual learning. If there’s another big wave of cases around here, some parents who picked the in-person option are going to want to switch to online-only; if the cases dwindle down to almost none, parents who picked the online-only option will want their kids to get back into the classroom.
The old saying that “no plan survives contact with the enemy” applies to education and pandemics. Every plan is tentative and adjustable and will have to be adjusted based upon changing circumstances. You have to wonder if the tension surrounding which plan to implement amounts to wasted energy, when it is so likely that the plan will have to be changed as the school year progresses, anyway.
Donald Trump has been pressuring public schools around the country to fully reopen. So, of course, nearly every piece and cable news segment I saw on the issue yesterday either contended or insinuated that the president was “ignoring science” — the Washington Post’s cool-headed conservative columnist Jennifer Rubin simply accused Trump of wanting to “kill your kids.”
Unmentioned by most is the fact that the American Academy of Pediatrics, a group that represents 67,000 pediatricians, “strongly advocates” that every policy about next year “start with a goal of having students physically present in school.”
The group goes on:
The importance of in-person learning is well-documented, and there is already evidence of the negative impacts on children because of school closures in the spring of 2020. Lengthy time away from school and associated interruption of supportive services often results in social isolation, making it difficult for schools to identify and address important learning deficits as well as child and adolescent physical or sexual abuse, substance use, depression, and suicidal ideation. This, in turn, places children and adolescents at considerable risk of morbidity and, in some cases, mortality. Beyond the educational impact and social impact of school closures, there has been substantial impact on food security and physical activity for children and families.
Some people like to unsheathe “science” whenever it wants to shut down debates over policy tradeoffs, but in this case, not even “science” is opposed to reopening schools. Some European countries have successfully kept schools open throughout the pandemic, and others have had them open since April. Denmark, Austria, and Germany have all begun reopening classrooms, and none have seen a significant increase in cases.
I don’t know if the American Pediatric Association will ultimately be right, but the fact that the CDC — which, let’s not forget, advised Americans not to wear facemasks as the pandemic exploded and then later sent out tests tainted with COVID — has done everything it can to dissuade schools from holding in-person classes this fall does not imbue me with great confidence. Yet, not even the CDC has recommended school closures.
In the end, the decision over school reopenings will hinge on numerous societal considerations and not merely “science” — which itself is open to interpretation and debate. This is one of those times the public could use lots more information, but instead, as is often the case during the Trump era, they are subjected to journalistic malpractice.
Opinion