Year-over-year hay stores up across the U.S. 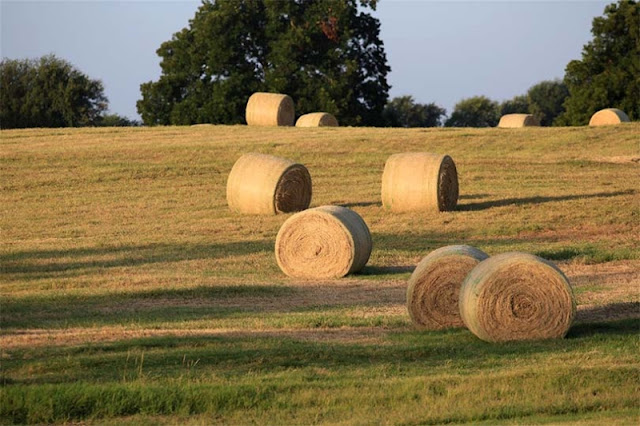 By Jennifer Dorsett
Hay stores in the U.S. are up significantly over one year ago, according to a recent U.S. Department of Agriculture’s (USDA) Crop Production report.
All hay stored on U.S. farms as of May 1 totaled 20.4 million tons, up 37 percent from the same time last year, which was the second lowest since records began in 1950.
In Texas, there were 1.95 million tons of hay in storage at the first of May, an increase of 26 percent over May 2019.
“Higher 2020 inventories are likely due to increased production in 2019,” Tracy Tomascik, Texas Farm Bureau (TFB) associate director of Commodity and Regulatory Activities, said. “The spring of 2019 was very wet and yielded much hay tonnage across Texas.”
Hay disappearance, a measure of use of supplies, was 64.1 million tons between Dec. 1, 2019 and May 1, 2020.
This year’s winter hay disappearance was lower than previous years, but Tomascik said Texas ranchers experienced a reasonably mild winter, so the amount of hay fed throughout the winter months was lighter than expected.
So far, Texas hay farmers have had a relatively good spring and early summer with good production and quality, Tomascik said. He expects prices to remain steady, if somewhat depressed, from recent years when stocks were smaller.
However, the hay market is regionally-based.
“South Texas ranchers have been experiencing drought and will likely feed more hay this year if they don’t get substantial rainfall,” he said.
Drought continues to increase in the Texas Panhandle, according to the Texas Water Development Board’s water weekly report.
Despite ranchers holding cattle for longer periods right now, the COVID-19 pandemic has had little effect on hay stores this year so far, Tomascik added. But that may change if more of Texas slips into drought over the summer.
“There are a lot of cattle being held on pasture instead of taking the low prices to sell into a feedlot that would have normally happened in April and May,” he said. “Many areas of Texas have been lucky so far to graze cattle on good pastures, but that’s all about to play out.”
Farm and Ranch