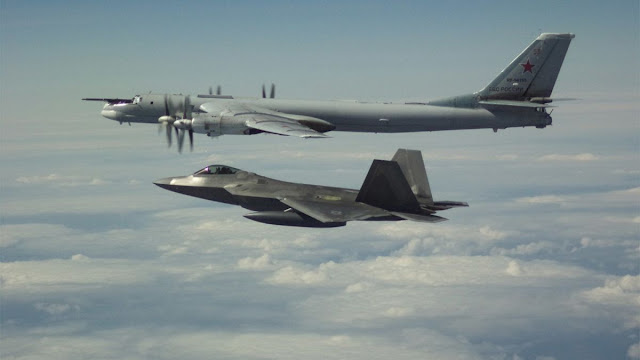 “Despite the challenges posed by COVID-19, NORAD’s remains ready and poised to defend the homelands 24 hours a day, 7 days a week, 365 days a year,” NORAD commander Gen. Terrence O’Shaughnessy said in a statement.

The first formation – which had two Russian Tu-95 bombers, two Su-35 fighter jets and an A-50 airborne early warning and control aircraft – came within 20 nautical miles of Alaskan shores, according to a NORAD news release.

The second formation – which had two Tu-95 bombers and an A-50 – came within 32 nautical miles, NORAD said.

The Russians remained in international airspace the whole time, according to NORAD.

While such intercepts are not uncommon, Wednesday’s incident was notable for how close the Russians got to U.S. airspace.

With U.S. territorial airspace extending 12 nautical miles off the coast, the first formation got within eight miles and the second within 20 miles.

“On several occasions, we have intercepted multiple Russian aircraft operating near Alaska and we will continue to do air patrols to protect the approaches to our nations,” O’Shaughnessy said in Wednesday’s statement.

“I offer that level of detail to illustrate the point we will continue to execute our homeland defense missions with the same capability and capacity we always bring to the fight. That does not happen by luck. It happens because we [are] taking deliberate – and at times, difficult – measures to ensure we are able to conduct our no-fail missions.”