US deploys aircraft carriers amid tensions with China 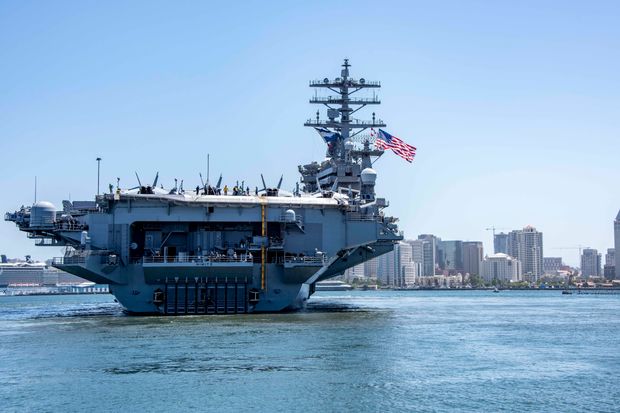 The U.S. has deployed two aircraft carrier strike groups to the Pacific, the USS Ronald Reagan and USS Nimitz, as part of efforts to safeguard against the possibility of another coronavirus outbreak in the region.

The deployments come as China, which has a history of tensions with the U.S. in the region, has also increased its presence, the Wall Street Journal reported.

The defense ministry of Taiwan, which China does not recognize as independent, said Tuesday several Chinese jets briefly entered the country’s air defense identification zone, while Japan’s government said a Chinese aircraft carrier and its strike group were sighted making a return trip through the southern part of Japan’s island string for the first time in April.

The U.S., meanwhile, launched the deployment after a coronavirus outbreak forced the USS Roosevelt into port in Guam earlier this year. Rear Admiral George M. Wikoff, commander of the strike group led by the Reagan, said the Navy was building on this experience to create a “bubble of health.”

All crew members involved in the deployment were tested twice for the virus during a two-week quarantine ahead of embarking, during which some asymptomatic carriers were identified and kept off the ships, a Navy official told the newspaper.

New procedures have been put in place that allows crew with a fever to call for medical staff without physically walking to the sickbay, potentially spreading the virus along the way, as well as creating designated areas onboard for isolation. The ships will also broadcast video messages highlighting safety precautions such as social distancing and personal protection equipment.

“The bottom line is that the mission endures and doesn’t take a break for the virus,” Rear Adm. Wikoff said from the USS Ronald Reagan on a call with reporters, according to the newspaper. “We continue to promote regional security with our partners and maintain a very high state of readiness,” he said while declining to discuss specific areas of operation.