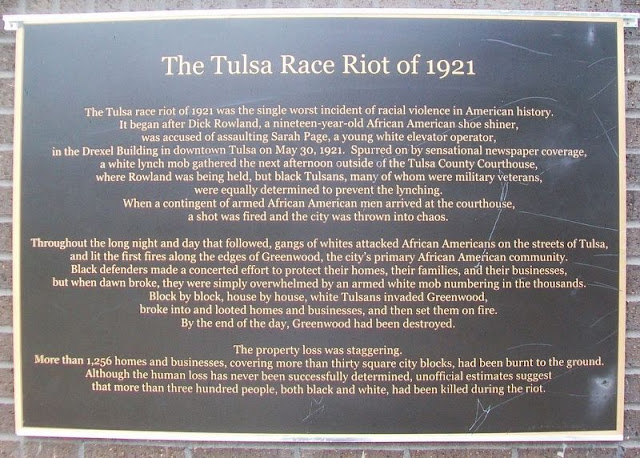 President Trump will begin campaign rallies again next week but the first event on his schedule is drawing accusations of racial insensitivity — even as his allies make a very different case.
Trump’s first rally since the nation went into a coronavirus-related lockdown in March will be held in Tulsa on June 19. The Oklahoma city was the site of one of the worst racial massacres in modern U.S. history back in 1921, while June 19 is “Juneteenth,” which marks the end of slavery.
Democrats are outraged by Trump’s decision, especially in the wake of a series of controversial comments the president has made about nationwide protests over the killing of George Floyd in Minneapolis on May 25.
Bakari Sellers, a former Democratic state representative in South Carolina, said Trump’s choice of venue was “disrespectful.” Sellers also predicted that the president would employ the kind of incendiary rhetoric that he has used on many other occasions.
“You never want the arsonist to put gasoline on the fire, and that’s what he will be doing,” Sellers said. Referring to one of the president’s most conservative advisors, Sellers added, “Stephen Miller and Donald Trump don’t deserve to be anywhere close to the discussion of race.”
Some media reports have drawn a parallel between Trump’s decision to go to Tulsa and then-candidate Ronald Reagan’s choice of a country fair in Mississippi to deliver a speech on “states’ rights” in 1980.
Reagan made that speech at the Neshoba County Fair. This was the same county in which three civil rights workers — James Chaney, Andrew Goodman and Michael Schwerner — had been murdered less than two decades before. The killings form the basis of the movie Mississippi Burning, and Reagan’s speech was seen by critics as a “dog whistle” to southern racists.
The Trump team is aggressively defending the move to hold the rally in Tulsa, however.
White House Press Secretary Kayleigh McEnany told reporters on Thursday that “the African American community is very near and dear to his heart. At these rallies, he often shares the great work he has done for minority communities.”
McEnany added that the rally would be “a meaningful day” for Trump.
Trump’s campaign manager Brad Parscale tweeted that “as the Party of Lincoln, Republicans are proud of what Juneteenth represents and the Emancipation Proclamation.” Parscale contended that Trump had a “solid record of success” for black Americans whereas presumptive Democratic nominee Joe Biden had “the horrible record of racial division and condescension.”
In another shot across Biden’s bows, the Trump campaign team posted a short video where the Democrat appeared to say — though somewhat indistinctly — that Trump was “going to down to Texas on Juneteenth,” not Oklahoma.
Not all Republicans seem to be solidly behind Trump’s decision, however. On NBC’s “Today” show, the sole black GOP senator, Sen. Tim Scott (R-S.C.) sounded lukewarm at best about the idea:
“I would certainly say that the more diverse our staffs, the more we avoid these public issues that come about. So I don’t have a good answer for that because I’m not on his staff and don’t know what his plan is,” Scott said in response to a question about the planned rally from Al Roker.
Tulsa was convulsed by violence almost a century ago. White mobs attacked black residents of a district called Greenwood, which included what was then known as the city’s Black Wall Street because of its thriving businesses. An accurate death toll has never been established because the episode was downplayed at the time, but some estimates hold that almost 300 people were killed.
Biden aides honed in on Trump’s decision. Symone Sanders, a senior advisor, criticized Trump on Twitter for what she saw as his “unmitigated gall” and Kamau Marshall, Biden’s director of strategic communications, said the decision was evidence that Trump is racist.
The choice of rally venue comes amid other furors, where Trump threatened protesters at the White House with “vicious dogs,” said on Twitter than “when the looting starts, the shooting starts,” and has repeatedly cast protestors as radicals and subversives.
On Tuesday, Trump sparked fresh uproar with an unjustified suggestion that a 75-year-old protester injured by police in Buffalo, N.Y., could be “an ANTIFA provocateur.”
Independent observers are even more perplexed by Trump’s decision to go to Tulsa against this backdrop.
“At this point, it is just completely baffling to me,” said Grant Reeher, a professor of political science at Syracuse University’s Maxwell School. “He is going all-in on ‘Law and Order’ and rejecting the very premise of the protests and sticking it in your eye.”
Tobe Berkovitz, a Boston University professor who specializes in political communications, cast the decision as another Trump move aimed at provocation above all else.
“I’m sure most analysts would see this as yet more race-baiting by the president,” Berkovitz said. “In this case, I see the race-baiting as secondary to him saying, ‘Well, what does the intelligentsia elite want me to do — and let me do the opposite.’”
National