Trump warns he will take back Seattle from 'ugly Anarchists' 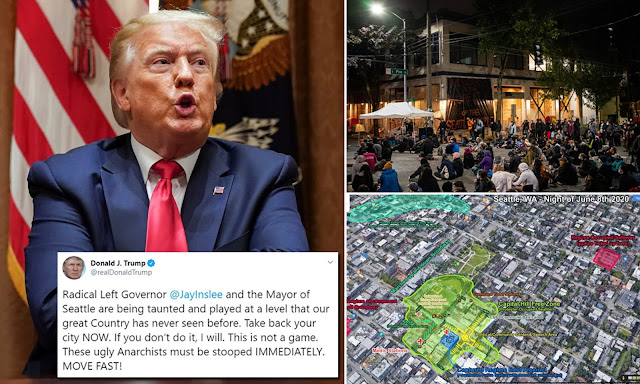 President Trump warned Wednesday night that he would take Seattle back from the “ugly Anarchists” protesting over George Floyd’s death if the city and state leaders do not act.

The president took to Twitter to criticize “Radical Left” Washington Gov. Jay Inslee (D) and Seattle Mayor Jenny Durkan (D) after a group of protesters took over City Hall and declared it a police-free autonomous zone.

“Radical Left Governor @JayInslee and the Mayor of Seattle are being taunted and played at a level that our great Country has never seen before. Take back your city NOW,” Trump posted. “If you don’t do it, I will. This is not a game. These ugly Anarchists must be stooped IMMEDIATELY. MOVE FAST!”

“Domestic Terrorists have taken over Seattle, run by Radical Left Democrats, of course,” he added in a later tweet. “LAW & ORDER!”

Demonstrators briefly took over City Hall, calling for the defunding of police and the resignation of Durkan. The protesters have established the “Capitol Hill Autonomous Zone” in Seattle's Capitol Hill neighborhood after police left the area, giving the demonstrators free reign in the area.

Durkan responded to the president’s tweet in a post, saying “Make us all safe. Go back to your bunker,” referencing reports that the president was moved to the White House bunker after protesters temporarily breached barricades outside.

Protests have broken out across the country in response to Floyd’s death while in Minneapolis police custody. The demonstrations have been largely peaceful, with some violence and looting breaking out in cities.

Trump has stressed “law and order” amid the protests and threatened to send the U.S. military into cities if governors did not restore order.