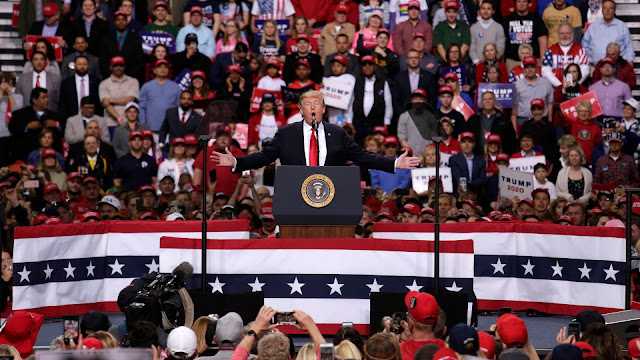 President Trump plans to restart campaign rallies in the next two weeks as states move forward with reopening businesses and allowing gatherings to resume.
The plans were first reported by Politico and confirmed by Trump campaign communications director Tim Murtaugh. The details of the rallies, including where they will take place and what safety protocols will be implemented, have not yet been decided.
Trump’s last campaign rally took place in Charlotte, N.C., in early March, before most states issued stay-at-home orders amid the coronavirus pandemic.
The president, who has been eager to return to normal campaign activities, resumed official travel in early May with a trip to Arizona and has visited a handful of states in recent weeks to tout federal efforts to address the coronavirus and attend a historic space launch.
He is reportedly expected to attend a fundraiser in Dallas, Texas, on Thursday.
The decision to resume campaign rallies comes as Trump is confronted with polls showing him trailing presumptive Democratic nominee Joe Biden nationally and in key battleground states five months out from the November presidential election.
The rallies will offer Trump an opportunity to excite his base of supporters and tout May's surprisingly positive jobs report as he shepherds the country through an economic recovery amid the coronavirus outbreak.
The economy, which has been devastated by the coronavirus closures, is central to the president’s reelection bid. Trump seized on Friday's report showing the U.S. economy added 2.5 million jobs last month, describing it as perhaps the "greatest comeback in American history."
Meanwhile, Trump Victory, the joint venture between the Trump campaign and the Republican National Committee, is resuming in-person volunteer activities this week in states that allow it.
The Trump campaign has been staging virtual events in place of in-person activities during the pandemic, and they are continuing this week.
All 50 states and Washington, D.C., have moved forward with plans to reopen their economies as coronavirus cases decline or plateau. Still, Trump will likely be limited in where he can stage the events, given many states still restrict large in-person gatherings. Trump’s rallies regularly attract thousands of supporters.
The president earlier this month vowed to move the Republican National Convention out of North Carolina after the state’s Democratic governor insisted on the need to plan for a scaled-down convention with fewer attendees and social distancing measures in place. The convention is scheduled to take place in late August.
National