Trump: There won't be any defunding of police 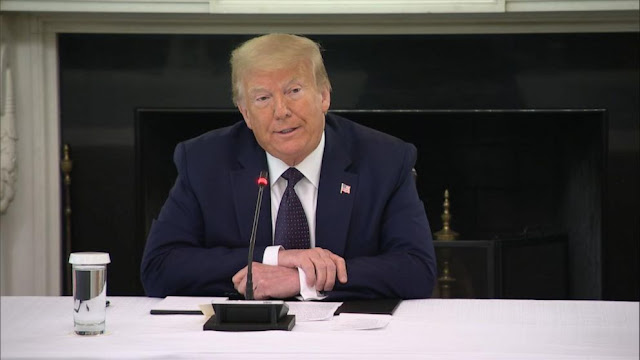 President Trump and his allies on Monday lashed out at activists and some Democrats for their support of the "defund the police" movement, seeking to draw a contrast with the administration's embrace of law enforcement amid nationwide protests.
White House aides and campaign officials sought to tie Democrats to the mantra of "defund the police," which has gained steam on social media and at some protests after George Floyd's death May 25.
"There won’t be defunding. There won’t be dismantling of our police, and there’s not going to be any disbanding of our police. Our police have been letting us live in peace, and we want to make sure we don’t have any bad actors in there," Trump said during a meeting with law enforcement officers and police chiefs at the White House, adding that he believes "99 percent" of officers are "great people."
Press secretary Kayleigh McEnany told reporters at an earlier briefing that "the president is appalled by the defund the police movement," singling out pledges from the mayors of Los Angeles and New York City to cut police budgets.
"That means cutting of police. That means reducing police departments. That means defunding police departments, if not getting rid of them entirely," she said. "No, [Trump] doesn’t agree with that."
Trump has harped on the topic in the past 48 hours, seeking to paint himself as the candidate of "law and order."
"Sleepy Joe Biden and the Radical Left Democrats want to 'DEFUND THE POLICE'. I want great and well paid LAW ENFORCEMENT. I want LAW & ORDER!" Trump tweeted Sunday.
"Defund the police" has become a common refrain among protesters across the country in the last two weeks. Activists say they support demilitarizing and cutting funds for police departments and reallocating money to other services such as affordable housing and mental health. Some more liberal lawmakers and organizers are in favor of disbanding police departments in their current form altogether.
In Minneapolis, where a white officer has been charged with second-degree murder in Floyd's killing, city councilors pledged to dismantle the police department in favor of a new law enforcement system.
The movement has given Trump and his allies an opening to attack Democrats after weeks of difficult headlines for the president over his handling of the demonstrations after Floyd's death.
McEnany likened the push to the "abolish ICE" movement in 2018 that many Democrats backed in an effort to slash funding for Immigration and Customs Enforcement (ICE) amid the Trump administration's zero tolerance policy that led to the separation of migrant families. That movement, while endorsed by some prominent Democrats, did not garner support from the majority of the party.
Many Democrats have distanced themselves from the "defund the police" push, either deferring to local leaders who determine law enforcement budgets or signaling they prefer reforming policing practices as opposed to slashing funding.
Democrats in both chambers introduced sweeping reforms on Monday designed to combat racial disparities in the criminal justice system. Crafted by leaders of the Congressional Black Caucus, the legislation aims to rein in the use of excessive force, particularly the violence targeting blacks and other minorities.
Joe Biden, the presumptive Democratic presidential nominee, opposes defunding the police, a spokesman for his campaign said Monday.
"He hears and shares the deep grief and frustration of those calling out for change, and is driven to ensure that justice is done and that we put a stop to this terrible pain," spokesman Andrew Bates said in a statement. "Biden supports the urgent need for reform — including funding for public schools, summer programs, and mental health and substance abuse treatment separate from funding for policing — so that officers can focus on the job of policing."
The Trump campaign sought to attack Biden for issuing his opposition through a spokesperson rather than doing so personally.
"Until Americans hear from Joe Biden himself, they have no way of knowing where he really stands," communications director Tim Murtaugh said in a statement.
The White House has offered no specifics of its own for policing reforms it would support. McEnany said Trump had not reviewed the legislation unveiled Monday, but called the proposal to reduce immunity for police officers a "non-starter."
Trump has courted the support of law enforcement throughout his presidency, speaking at gatherings of officers and police chiefs on multiple occasions. In his public remarks following Floyd's killing, he has called the case a "disgrace" but focused mostly on the need for law and order and called for a crackdown on unruly protesters.
But he has stepped on his own message with controversial statements, tweeting that protesters were "thugs" and "hoodlums" and warning that "when the looting starts, the shooting starts," a refrain used by a Miami police chief in the 1960s to target black civil rights protesters.
National