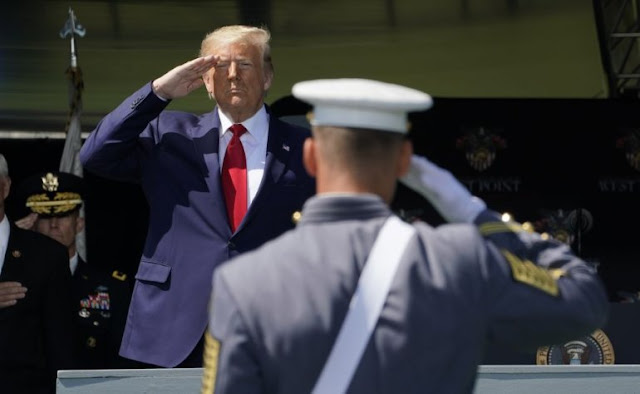 President Trump saluted West Point graduates for their service and accomplishments while emphasizing unity amid "turbulent" times during a commencement address Saturday that punctuated tensions over racial injustice and concerns about the novel coronavirus.
Trump used the address to congratulate the cadets, recognize the contributions of the U.S. armed forces to American society, and tout his own administration’s efforts to execute a “colossal rebuilding” of the military and end an “era of endless wars.”
“This premier military academy produces only the best of the best, the strongest of the strong and the bravest of the brave,” Trump said. “West Point is a universal symbol of American gallantry, loyalty, devotion, discipline and great skill.”
“To the 1,107 cadets who today become the newest officers in the most exceptional Army ever to take the field of battle, I am here to offer America’s salute. Thank you for answering your nation’s call,” the president continued.
The commencement was staged outside at the military academy’s campus in upstate New York, with the crowd of graduates adhering to social distancing guidelines, underscoring the continued threat of the novel coronavirus throughout the United States. The cadets marched out clad in masks and removed them upon taking their seats.
Family and other guests were not permitted to attend the ceremony as they normally would, which the president acknowledged at one point by encouraging graduates to applaud their parents as they watched the event remotely.
Gov. Andrew Cuomo (D) has limited outdoor, socially distanced graduations in the state to 150 people, though West Point is a federal facility and therefore not bound by Cuomo’s order.
Trump briefly mentioned the coronavirus, which has killed more than 114,00 people in the U.S., during his speech, referring to it as a virus that “came to our shores from a distant land called China” and pledging to “extinguish” it.
The address came against a backdrop of tensions between Trump and military officials over the handling of demonstrations spurred by the death of George Floyd at the hands of Minneapolis police.
The president did not mention Floyd on Saturday but made veiled references to the unrest that has gripped the country in the wake of his death.
Trump thanked National Guardsmen “who respond with precision to so many recent challenges from hurricanes and national disasters to ensure peace, safety and the constitutional rule of law on our streets,” an apparent allusion to his efforts to crack down on violence and looting that has accompanied some of the protests over police brutality and racism.
Trump also said that America’s institutions would endure “against the passions and prejudices of the moment.”
“When times are turbulent, when the road is rough, what matters most is that which is permanent, timeless, enduring and eternal,” the president said.
Prominent former military officials have rebuked Trump for his response to the recent demonstrations across the country as well as his threat to send active-duty troops to cities to quell violence.
James Mattis, Trump’s former defense secretary and a retired four-star general widely respected in military circles, is among those who have criticized the president.
Pentagon leaders have also faced blowback for their involvement in the president’s photo opportunity at St. John’s Episcopal Church in Washington, D.C., earlier this month, which occurred after protesters were forcibly cleared from the area by federal law enforcement and National Guardsmen.
Hundreds of West Point graduates signed on to a letter this week criticizing top Defense officials in the Trump administration for their involvement in the events surrounding the photo-op on June 1. In an extraordinary move, Joint Chiefs of Staff Chairman Gen. Mark Milley on Thursday said he regretted his involvement in Trump’s appearance at the church.
Trump, who has sought to tie himself closely to the military throughout his presidency and enjoys strong support from veterans, has maintained that his relationship with the military remains strong and shrugged off Milley’s statement.
On Saturday, Trump positioned himself as a champion of the military, highlighting his administration’s efforts to invest in new equipment and establish the U.S. Space Force.
“We are restoring the fundamental principle that the job of the American soldier is not to rebuild foreign nations but to defend and defend strongly our nation from foreign enemies,” Trump said. “We are ending the era of endless wars. In its place is a new clear-eyed focus on defending America’s vital interests.”
National