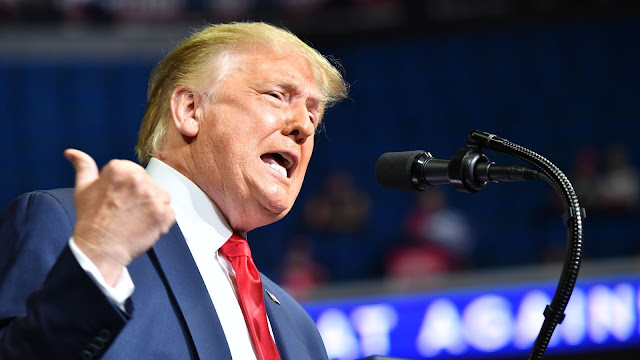 President Trump on Monday signed an executive order to suspend the issuance of certain temporary worker visas through the end of 2020, cracking down further on immigration after signing a more narrow measure in April.
The order applies to H-1B visas, H-2B visas, H-4 visas, L-1 visas and certain J-1 visas. It is the latest effort by the Trump administration to satisfy immigration hawks and groups that argue American workers should be prioritized, especially amid the economic downturn caused by the coronavirus pandemic.
H-1B visas are used for skilled workers and are common in the tech industry and is the largest visa program of those included in Monday's order as its recipients can stay for multiple years.
H-2B visas apply to seasonal workers. H-4 visas are given to spouses of H-1B visa holders.
J-1 visas are given to researchers, scholars and other specialized categories such as au pairs, while L-1 visas are used for executives transferring to the United States from positions abroad with the same employer. Roughly 300,000 J-1 visa recipients come to the U.S. every year, according to the American Immigration Council.
"Temporary workers are often accompanied by their spouses and children, many of whom also compete against American workers. Under ordinary circumstances, properly administered temporary worker programs can provide benefits to the economy. But under the extraordinary circumstances of the economic contraction resulting from the COVID-19 outbreak, certain nonimmigrant visa programs authorizing such employment pose an unusual threat to the employment of American workers," the order reads.
The restrictions are set to remain in place for the rest of the calendar year and can be extended.
A senior administration official said the visa restrictions would free up more than half a million jobs for workers already in the country. However, many companies are laying off workers due to the pandemic, and economic experts have acknowledged some of those jobs may not return.
The official said Trump has also directed aides to work on longer-term reforms to the immigration system. The president is pushing for a more merit-based system that would distribute H-1B visas based on which applicants received the highest wage offers, the official said.
The president is also pushing to close loopholes that allow companies to outsource labor to foreign workers, the official said.
The order does not apply to those already in the United States, and it gives the Trump administration some leeway in making other exceptions. For example, immigrants applying for visas to provide labor "essential to the United States food supply chain" are exempt. Individuals "whose entry would be in the national interests" as determined by the federal government are exempt as well.
The expanded visa restrictions may not have a significant immediate impact given the U.S. has barred noncommerce travel into the country from Canada, Mexico, China and Europe. But the move is likely to receive approval from Republicans and immigration hawks who have pushed for stronger measures to protect American jobs while the economy recovers.
"We’re hopeful this is going to see broad bipartisan support," the official said.
The order comes roughly two months after Trump signed an initial executive order that temporarily suspended the issuance of new green cards, citing the need to protect American jobs amid widespread unemployment during the pandemic.
The original order contained broad exemptions and was set to expire this week after a 60-day period. That measure was widely panned by allies of the administration who viewed it as too narrow and falling far short of Trump's pledge via tweet to "temporarily suspend immigration into the United States."
"I think it’s going to make a lot of people very happy, and it’s common sense, I mean, to be honest with you. It’s common sense," Trump said of the order during an interview Saturday with Fox News.
Immigration hawks largely welcomed Monday's executive order despite some of the exemptions.
"For the most part, the president withstood intense pressure from powerful business interests that continue to demand more cheap foreign labor, even as they have laid-off an unprecedented number of American workers over the past three months," Dan Stein, president of the Federation for American Immigration Reform, said in a statement.
"We fully expect that the agencies charged with carrying out this Proclamation in furtherance of the president’s intent to aid struggling American workers will resist pressure from corporate lobbyists to abuse their discretionary authority," Stein added.
Business groups expressed concerns about the measure, which they argued would discourage qualified workers from coming to the U.S.
"Restrictive changes to our nation’s immigration system will push investment and economic activity abroad, slow growth, and reduce job creation," U.S. Chamber of Commerce CEO Thomas J. Donohue said in a statement.
Sen. Lindsey Graham (R-S.C.), a staunch ally of the president, said in a statement that he worried the executive order "will create a drag on our economic recovery."
"Those who believe legal immigration, particularly work visas, are harmful to the American worker do not understand the American economy," Graham said.
National World