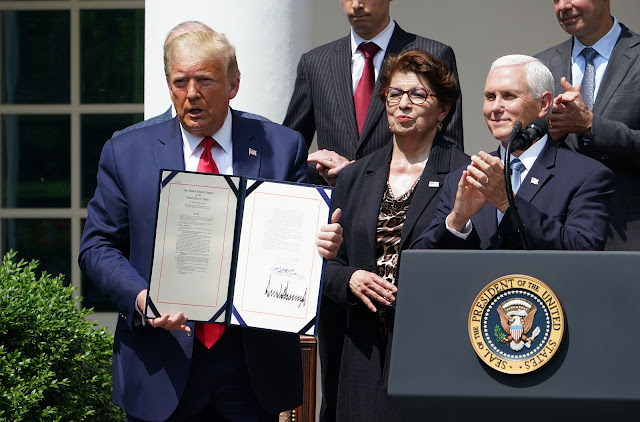 President Trump on Friday signed legislation offering more flexibility for a program meant to provide aid to small businesses adversely impacted by the coronavirus.
Trump signed the bill, approved by the Senate earlier this week, during a Rose Garden event during which he cheered the surprisingly positive federal jobs report issued Friday morning.
The bill extends the window for businesses to spend loans granted under the Paycheck Protection Program (PPP), which was established by $2.2 trillion coronavirus relief legislation signed at the end of March.
“I want to thank the Democrats. I think we had essentially unanimous votes in the Senate and the House,” Trump said at the news conference, calling it a “very important” piece of legislation. The bill passed the Senate by unanimous consent on Wednesday after the House approved the bill in a 417-1 vote last week.
Trump repeatedly said he wanted to work with Democrats, despite persistent high tensions between him and Democratic House leadership.
“I hope we can get along with the Democrats because it’s been a disaster for our relationship,” Trump said.
Treasury Secretary Steven Mnuchin, who has led negotiations on stimulus legislation for the White House, noted in brief remarks that the bill is a “direct result” of consultations with the restaurant and hotel industries. The White House hosted a roundtable with restaurant industry executives last month during which private sector leaders pressed for more flexibility in the lending program.
The original coronavirus relief package gave businesses eight weeks to spend PPP funds. The bill signed into law Friday extends that period to 24 weeks.
It also adjusts a 75-25 ratio included in the March bill requiring businesses to spend 75 percent of the loan on payroll and 25 percent on other fixed costs to a 60-40 ratio.
Before signing the bill into law, the president in an extended and rambling address praised the statistics released Friday morning showing that the U.S. added 2.5 million jobs and that the unemployment rate dropped to 13.3 percent during the month of May.
The figures came as a surprise to economists who predicted the employment rate would spike from 14.7 percent in April to potentially 20 percent or more.
Trump described the report as indicative of better than a V-shaped economic recovery, comparing it to a “rocket ship.”
“Today is probably if you think of it the greatest comeback in America history,” Trump said.
The president also briefly addressed future stimulus talks, repeating his desire to see a payroll tax holiday and tax deductions for businesses spending money on restaurants and entertainment.
“To save the economy, we passed several pieces of critical legislation,” Trump said. “We’re set up to do more if we want. I think we should because we are dominant.”
The White House has been engaged in informal talks with Congress on a fourth relief package, but has held off on formal discussions. Administration officials say they want to assess the impact of prior legislation before negotiating a deal for the fourth package.
“There are no formal negotiations yet, but there are contacts at the highest level,” White House economic adviser Larry Kudlow said Thursday evening, predicting that formal negotiations could start after the July 4 recess.
National