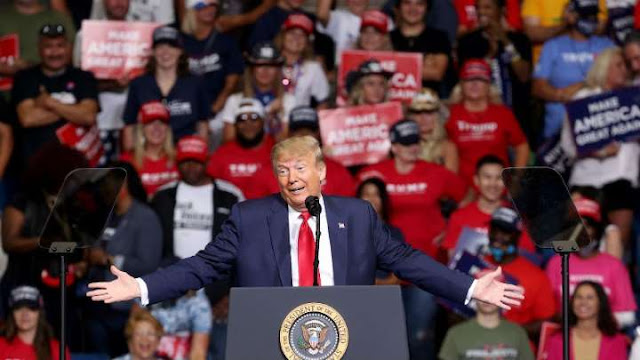 President Trump's rally in Tulsa, Okla., generated the largest Saturday audience in Fox News Channel's 24-year history in delivering 7.7 million viewers, according to the early Nielsen data.
The rally, which began shortly after 8 p.m. and ran for approximately one hour and 45 minutes, was also the network's highest-rated telecast of the year after the president's State of the Union address, which drew 8.2 million viewers in early February.
The Trump campaign also says 4 million additional unique viewers watched on streaming platforms online.
“President Trump’s rally in Tulsa attracted over 4 million unique viewers across all of the campaign’s digital media channels. The live-streamed pre-rally shows drew an audience of more than 2.5 million unique viewers by themselves,” said Tim Murtaugh, communications director for Trump 2020.
CNN and MSNBC did not carry the rally live.
The big story of the rally was attendance, as Trump failed to pack the 19,000-seat BOK Center in Tulsa. The Trump campaign canceled planned outdoor remarks by Trump and Vice President Pence and disassembled an outdoor stage minutes before Trump began his remarks inside the center.
Murtaugh blamed protesters over the lack of attendance while critics of Trump pointed to teenage activists. The Trump campaign said it had received more than 1 million requests to attend the rally.
The rally also took place against a backdrop of rising COVID-19 cases in Oklahoma and a number of other states.
The viewing numbers come as Nielsen also reports that former national security adviser John Bolton's interview special on ABC with anchor Martha Raddatz drew 6.2 million viewers, making it the most-watched program on television Sunday night.
Bolton is currently on a media tour to promote his new book, “The Room Where It Happened: A White House Memoir," currently No. 1 on Amazon's bestseller list. The scathing portrayal of Trump during Bolton's 17-month tenure as national security adviser will be released on Tuesday.
National