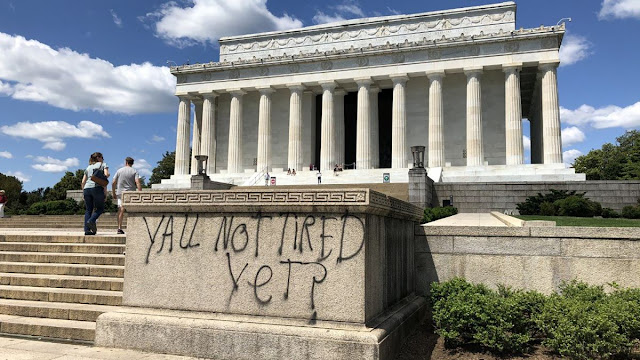 President Trump said Tuesday he is preparing an executive order to reinforce existing laws that punish people for vandalizing monuments as he digs in on his opposition to the removal of statues honoring controversial historical figures.
"I will have an executive order very shortly, and all it’s really going to do is reinforce what’s already there, but in a more uniform way," Trump told reporters at the White House before leaving for a trip to Arizona.
The president's comments came after attempted to topple a statue of President Jackson in Lafayette Square across the street from the White House on Monday night. Law enforcement intervened, deploying pepper spray and using force to disperse the protesters before the statue could be pulled down.
Trump on Tuesday hailed law enforcement and urged "long-term jail sentences" for those who vandalized the statue of Jackson, who fought in the War of 1812, opposed the abolition of slavery and signed the Indian Removal Act.
"We are looking at long-term jail sentences for these vandals and these hoodlums and the anarchists and agitators, and call them whatever you want," Trump said. "Some people don’t like that language, but that’s what they are. They’re bad people. They don’t love our country. And they’re not taking down our monuments. I just want to make that clear."
The executive order as Trump described it appeared to be largely symbolic. Existing law already makes it criminal to destroy "any structure, plaque, statue, or other monument on public property commemorating the service of any person or persons in the armed forces of the United States."
But Trump has in recent days dug in on his opposition to the removal or desecration of statues and military bases honoring Confederate leaders amid growing calls for change among protesters and some lawmakers.
Statues have been toppled or defaced at various protests around the country this month, including figures associated with the Confederacy, such as a statue of Jefferson Davis in Richmond, Va., as well as others associated more generally with racist policies and rhetoric, such as former Philadelphia Mayor Frank Rizzo (D) and various statues of Christopher Columbus.
Lawmakers in both parties have also discussed renaming military bases that bear the names of Confederate generals, a move Trump has staunchly opposed.
National